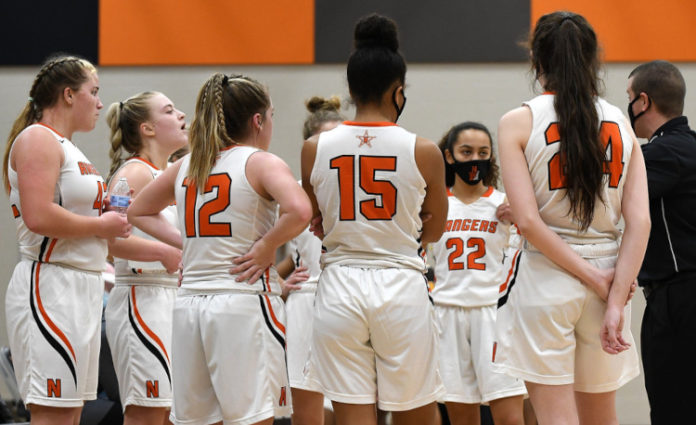 North dominated the glass in fending off visiting Andrews-Osborne Academy in a 68-55 non-conference win on Monday.

The Rangers pulled down 32 rebounds to just 14 for the Phoenix.

“It was rebound by committee out there,” said North coach Paul Force. “We had a lot of girls make impact plays on both ends. I saw some fire and some passion from some of our players that I haven’t seen in a few games. It was definitely a good test.”

North, who improved to 5-2 overall, took control early as the Rangers built an early 19-10 lead and extended that advantage to 39-26 at the break.

Andrews adjusted its defense for the second half and that gave the Rangers some fits.

“They changed up defenses quite a bit there and got us into some turnovers in that third quarter and they took advantage with some points after turnovers,” Force said. “We were able to kind of settle in and once we identified what they were doing it became a matter of execution.”

The Phoenix outscored the Rangers in the third quarter, 15-12.

Andrews worked hard to slow down Abby Carter, who scored a game-high 28 points, and Avril Drew, who finished with 19.

That left Dori Siekaniec with more room to work and she took advantage of the opportunity and finished with a career-high 14 points.

“It was very exciting,” Siekaniec said. “My teammates did a great job of getting me wide-open shots that I was able to knock down and when I didn’t, I knew that they were going to be there getting the rebounds.

The junior has seen her minutes increase as the season has progressed and her success has left her eager to accomplish even more this season.

“I feel like I’m getting more comfortable,” she said. “My teammates have done a great job of giving me the confidence to step up when I need to.”

Carter and Drew both pulled down eight rebounds for the Rangers while Hailie Wilson and Cece Hamilton grabbed seven and five, respectively.

“The effort on the boards was high,” Force said. “I thought we did a good job on the boards and now it’s just cleaning up the offense a little bit, which is hard to say when you score as many points as we did but it’s still four or five possessions that we’d like to have back. That’s something we’ve been working on all year. Fortunately, tonight, we were able to do enough that it didn’t impact the result.”

North travels to Chardon on Wednesday.