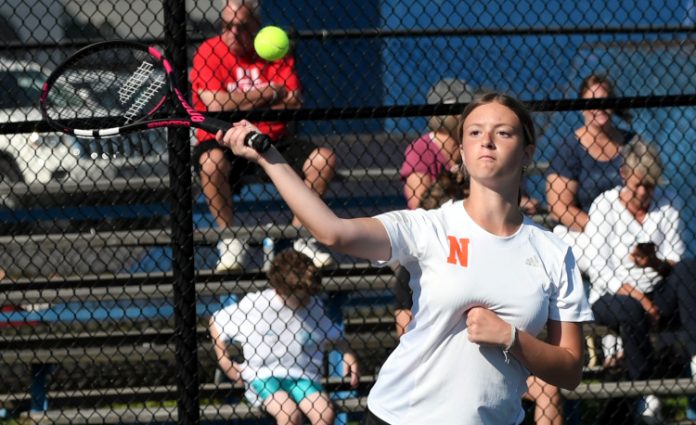 North’s girls’ tennis team used some downtime to recharge and refocus and the result was a 4-1 win at Brush on Thursday.

The win was the second of the season for the Rangers.

“A win always feels good,” said North coach Nick Mayer. “Earlier this week, we had a break from matches and were able to get some really good practices in. The girls had great focus during these practices and it showed during their matches today.”

With the win, the Rangers improved to 2-8 on the season but more importantly, they gained valuable confidence and experience.

“When scheduling matches this season, I was looking to find good competition,” Mayer said. “When you play good programs you may lose some games. Every match is competitive and the girls feel like they can win any match. They are gaining a lot of experience and their confidence is growing. What is great is that it’s happening at a great time in the season with the (Western Reserve Conference) tournament and sectionals coming up.”

“I think it is great that the team won,” Cannato said. “Tennis is more of an independent sport and you play your own individual games but at the same time, it is a team sport where everyone has to do their part to get that win and that’s what the team did today. Everyone put in the hard work and it paid off.”

Cannato thrived at the service line and also in countering the shots her opponent sent over the net.

“Today in my match, I think there were a few things working well for me,” she said. “My opponent hit the ball high several times and I think I did really well hitting back the overheads. In tennis, overheads can be hard but the ball had a nice pace and landed in. My serves were also good; they always landed in and especially towards the end there was a lot of topspin on the ball.”

Winning in a dominant fashion has Cannato feeling more confident as she heads into the second half of the season.

“In tennis, like in every sport, mindset plays a big role in how you play,” she said. “I am very proud of how I played today and dominating a match like today makes me feel more prepared for later games and more confident with my skills. I am feeling hopeful heading into the final stretch of the season.”

Ashley Gomolka and Kayla Gomolka dropped their match at first doubles, 6-2, 6-2, but the Rangers won at second doubles with Peyton Chrzanowski and Courtney Cogan teaming up to claim a 6-3, 6-3 victory.

“Big credit to the second doubles team,” Mayer said. “Peyton Chrzanowski and Courtney Cogan both have been working hard on their individual games and have been putting in new tactics to use against their opponents. I can’t wait to see them use these against more opponents in future matches.”