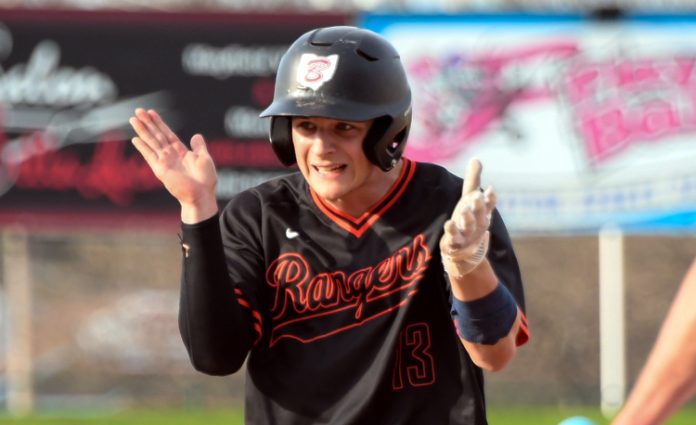 North honored its seniors with a 10-8 non-conference victory over visiting Villa Angela-St. Joseph on Monday.

The Rangers scored three runs in the first inning and then had to rally from behind after the Vikings scored six runs in the second.

“It was a good win,” said North coach Joe Iveljic. “We played all of our 10 seniors and we gained some confidence and have some momentum going into the postseason.”

North scored three runs on two hits in the bottom of the first.

Ethan Zele drew a one-out walk and Trent Bucy singled. Matt Barner followed with a sacrifice fly and Blane Schmidt hit an RBI double and then scored on an error.

The Vikings responded with six runs on just one hit in the top of the second.

Three walks, an error, and a hit batsman set up VASJ’s big inning.

North began its comeback in the third when Zele walked and scored on Bucy’s RBI single.

The Rangers tied the game with two runs in the fourth.

Chase Federer singled and Brody Spock walked. Federer scored on a balk and Jacob Henderson knocked in Spock to tie the game.

North took the lead for good in the fifth.

VASJ pulled to within 9-8 with two runs in the sixth and the Rangers closed out the scoring with a run in the sixth.

Logan Metz and Bucy both recorded two hits for the Rangers.

Metz, the ace of the pitching staff, took advantage of his rare opportunity to bat.

“It was just fun getting to swing and getting everyone hype knowing I don’t hit a lot,” he said. “I was just trying to go up there and kill the ball. I don’t swing a lot so, (I was) just swinging for the fences.”

Metz doubled and scored in the bottom of the sixth to give the Rangers an insurance run.

“It was fun getting the win on senior night,” Metz said. “I think it will loosen us up for (Tuesday’s sectional semifinal against rival South) and make us play better overall.”

Spock and Henderson both pitched one inning. Schmidt entered the game in the third and struck out five in three scoreless innings of work to earn the win. Zele pitched the final two innings and ended the game with four strikeouts.

“We had a plan kind of going into it with the senior arms,” Iveljic said. “We wanted to keep their pitch counts super low so we’d have the ability to use them (on Tuesday) and we were able to do that. Aside from that one inning, we played pretty good baseball.”

Hornets bounce back with big win