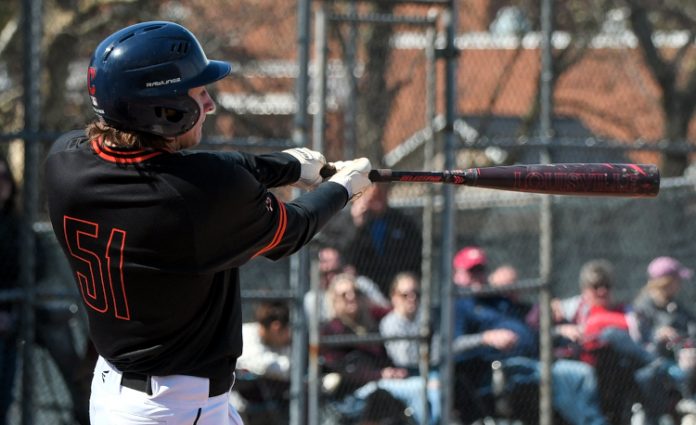 North scored a run in the bottom of the sixth inning to edge visiting Madison in a Western Reserve Conference game on Thursday, 4-3.

Madison took a 3-1 lead in the third inning but the Rangers responded with two runs in the bottom half of the inning and then the two teams played scoreless baseball until the sixth.

“We had a solid pitching performance,” said North coach Joe Iveljic. “We had a few guys pitch because we have three conference games early next week so we had Logan Metz on a pitch count and then we finished it off with Jacob Henderson and Nick Licursi, who did very well and we played pretty good defense behind them.”

The Rangers struck first with one run in the bottom of the first inning when Devin Nix reached on an error, stole his way to third, and then scored on Trent Bucy’s RBI single.

Madison scored three runs without a hit in the top of the third.

A leadoff walk, a hit batsman, and another walk loaded the bases with no outs. A third walk forced in a run and then the Blue Streaks scored two more runs on back-to-back groundouts.

Metz allowed three runs and struck out three without giving up a hit in three innings.

Ethan Zele and Bucy drew back-to-back walks to start the North third and Matt Barner singled to load the bases. Blane Schmidt reached on an error that allowed two runs to score.

Andrew Gunton started the North sixth inning with a single and he moved to second on a passed ball. Owen Hopper followed with an RBI single that turned out to be the game-winning hit.

Bucy finished the game 2-for-2 and Nix, Barner, Gunton, Hopper, and Sean Register each had one hit for the Rangers.

“Trent has been out of the lineup a little bit with a shoulder injury, so having him back in the three-hole was key because he had two big hits,” Iveljic said. “We had some clutch hits to score runs in timely situations. Unfortunately, we ran ourselves out of some runs as well. We were a little sloppy on the base paths. You’re going to have that from time to time, but we need to clean that up.”

With the win, the Rangers improved to 7-8 overall and 4-5 with three games left to play. The Rangers host South on Monday.