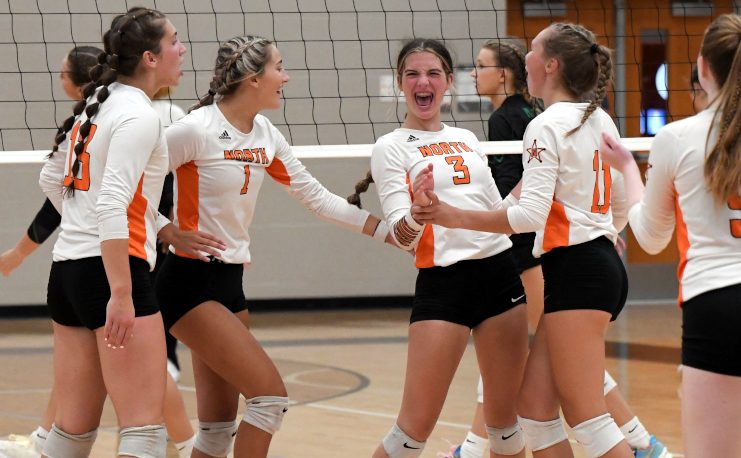 EASTLAKE–North edged Mayfield in five sets on Tuesday in the Western Reserve Conference opener for both teams.

“That was so exciting,” said North coach Tamara Heller. “I keep telling them that we’ve put in a lot of work and we’ve done a lot to get to this point and I truly believe that they deserve it. We deserve to be battling for one of the top three spots in the conference and I believe that’s a realistic goal for us.”

North outdueled Mayfield in the first set that saw several lead changes and no team holding more than a three-point advantage. The Wildcats did the same in the second set to tie the match at 1-1.

The Rangers imposed their will in the third set and built a double-digit lead they wouldn’t relinquish.

Mayfield fought off elimination to win the fourth set and set up the decisive fifth game.

“We’ve emphasized mental toughness but our experience also helped,” Heller said of her team’s ability to pull out the five-set win. “In years past, we were putting a lot of young kids on the court without a lot of experience. Last year, we had five sophomores in the starting lineup and now they’re juniors and I’m confident with what they’re doing and that experience helps because they’ve seen that type of pressure situation before and they’re more confident in those moments.”

Jaiden Anderson led the way for the Rangers.

She recorded 37 assists in engineering an offense that saw three hitters finished with eight or more kills. Anderson also recorded seven kills of her own.

“I give a lot of credit to our setter (Anderson),” Heller said. “It’s a hard job being a setter and understanding how to run an offense. Those numbers, having equal attempts between three or four hitters, is big and it sets us up for success because if we have just one hitter the team that scouts us is going to try to shut that girl down. But, if we can spread it out, we can be an unstoppable team.”

With their backs against the wall in the fourth set, Cami Welty came up with some big blocks and kills to give @ENVolleyball some momentum going into the fifth and deciding set #NHVolleyball pic.twitter.com/P1V2G7o685

It was a big night for the @ENVolleyball hitters and Madi Jablonski explains what they wanted to accomplish against Mayfield and how they executed their game plan #NHVolleyball pic.twitter.com/hHCMkGmKzc