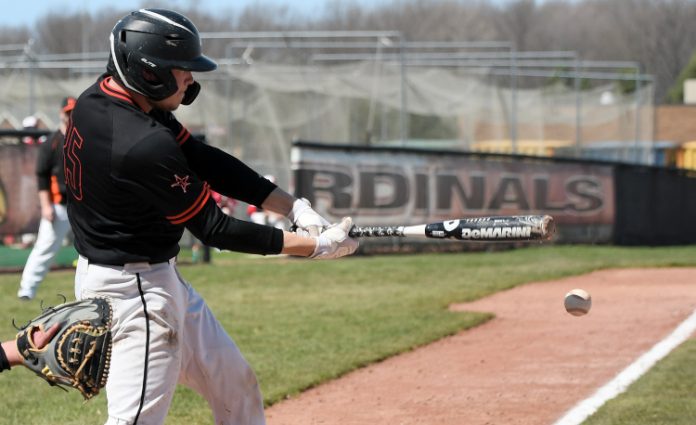 North earned a 5-3 non-conference win over visiting Medina on Saturday in one last game before opening the postseason on Tuesday.

The Rangers, who improved to 9-10 on the year, recorded just three hits in the win but a trio of pitchers limited Medina’s opportunities.

“We didn’t know what to expect,” said North coach Joe Iveljic. “I knew Medina was a pretty good team and they definitely were very solid in the field and on the mound. We wanted to come out and play clean baseball and throw strikes, and we did all that.”

Medina struck first with a run on two hits in the second inning.

North responded with two runs in the bottom half of the inning.

Matt Barner singled to lead off the inning and he scored on Andrew Gunton’s double. Sean Register then reached on an error that allowed Gunton to score.

The Bees tied the game at 2-2 in the third on a single and an RBI double.

North took the lead for good in the fifth when the Rangers scored three runs on just one hit.

Nick Licursi reached on an error with one out and Devin Nix drew a walk. After an Ethan Zele flyout, Trent Bucy drew a walk that loaded the bases, and Barner was hit by a pitch that gave North a 3-2 lead.

Medina scored a run in the sixth and had the tying run at the plate but Licursi pitched out of that jam and Gunton shut the Bees down in the seventh to seal North’s win.

Register started on the mound and went 4 1/3 innings in a no-decision. He allowed one earned run on five hits and he struck out six. Licursi relieved Register in the fifth and picked up the win after allowing one run on three hits in 1 1/3 innings. Gunton earned the save thanks to his scoreless seventh.

“Our pitchers did a great job today,” Iveljic said. “If they did give up a hit, they did a good job to avoid the big inning. They were able to pitch out of some jams and not let things get too out of hand.”

Barner, Schmidt, and Gunton each had a hit for the Rangers, who host South on Tuesday in a Division I sectional semifinal.