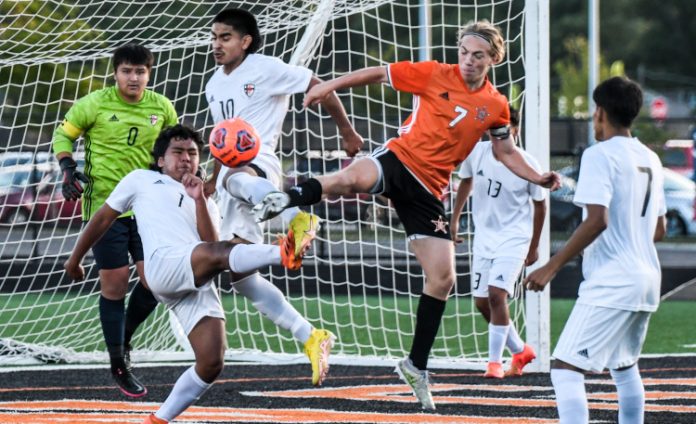 EASTLAKE—North’s offense had its opportunities but fell short in a 2-0 non-conference loss in the season-opener at Nick Carter Stadium on Friday.

Harvey led 1-0 at halftime and scored a goal late in the second half while holding off a violent attack from the Rangers throughout the final 40 minutes of the game.

“We had our chances to win the game, so kudos to them,” said North coach Steve Misick. “We have to figure a few things out.”

The Rangers graduated their top two goal scorers from a season ago and after finding their groove early in the second half, peppered the Harvey net with shot after shot.

“We’re a different type of team this year, for sure, but we’ve got to win the game in the midfield and we didn’t do that today,” Misick said. “(Harvey is) a good team and their spacing was excellent, they had good touch, and their communication was excellent. We didn’t really know anything about them because we haven’t played them before but we knew they were a good team. We wanted to win the game and we had our chances, but we knew weren’t going to go 17-0 with our schedule. We just gave them too much space and time to play, especially in the first half. Once we closed the gap and stopped letting them be so comfortable playing on the ball, suddenly the game evened out and we we had some nice chances.”

The Rangers will look to correct their mistakes in a scrimmage against Olmsted Falls on Tuesday and then they’ll play their second regular season game on Saturday at home against North Olmsted.

Rangers rebound with win over Euclid