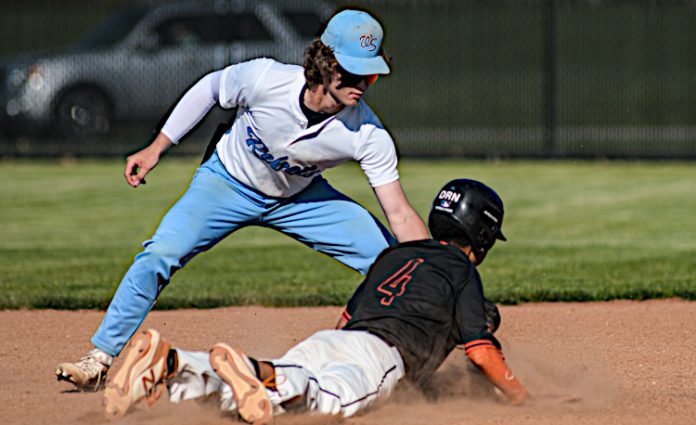 EASTLAKE—Vince Cairns pitched a complete game in South’s 10-4 win over host North in a Division I sectional semifinal on Tuesday.

The Rebels scored two runs on Jeremiah Atwell’s first-inning homer and then held off the Rangers down the stretch in the third meeting between the two rivals this season. North won the first game at Classic Park and South won the last two.

“Hats off to South, they came out and took an early lead and after we answered back they didn’t quit,” said North coach Joe Iveljic. “That’s what it kind of comes down to, they took advantage of their opportunities and you have to take your hats off to them and good luck to them in the playoffs.”

After South’s big first inning, the Rangers tied the score with two runs in the bottom of the second.

North took a 3-2 lead in the third when Devin Nix drew a leadoff walk and scored on Barner’s sacrifice fly.

South scored two unearned runs in the fourth on a fielding error and two throwing errors on pickoff attempts.

“That’s stuff we have practiced over and over and over again and we just kind of had some communication crossed and you end up throwing the ball away,” Iveljic said. “The third baseman wasn’t ready for the throw because he’s expecting something different. Those are the little things that when you don’t do them, bad things happen and they compound and it’s not good.”

Gunton tripled and scored on Chase Federer’s double in the bottom of the fourth but Cairns held the Rangers scoreless the rest of the way.

South scored three runs in the fifth, two in the sixth, and one in the seventh to close out the scoring.

Aaron Gillespie and Niko Frizell both recorded two hits for the Rebels and Gillespie knocked in a team-high two runs.

Gunton was 2-for-2 with two RBI for the Rangers.

Logan Metz pitched five innings for the Rangers. He allowed five earned runs on five hits and struck out nine. Gunton threw the final two innings. He allowed three runs on four hits and fanned one.

South improved to 9-13-1 and will travel to Green on Thursday for a sectional championship game.

“We’re going to work and get better,” Iveljic said of his thoughts after his first year as head coach at North. “I know a lot of these guys will be playing summer ball so we’ll keep tabs on them and get them back in the fall. We’ll be here earlier this year than we were last offseason so we’ll clean up some of the little things and get better. If we can be sound fundamentally and pitch and play defense, that’s how you win high school baseball games and we’ll get there.”