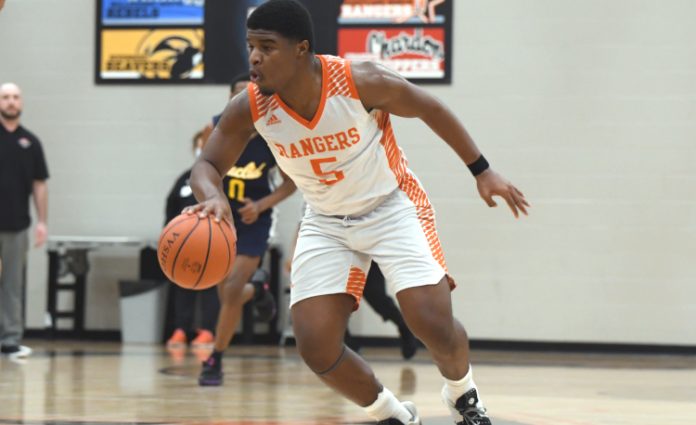 North jumped out to a big first-half lead and then held off host Lake Catholic down the stretch in a 76-73 non-conference win on Tuesday.

“We’ve been knocking on the door a couple of times and have been in games against good teams in the fourth quarter but we haven’t been able to put them away,” said North coach Matt Vespa. “I don’t remember the last time we’ve had a 15-16 point lead at halftime. Our guys haven’t been in that situation a lot, so it was great to be in that position and to learn how to finish it off.”

Sean Register, Jr. hit a pair of 3-pointers and Noah Adams and Mo Morgan also hit from behind the arc in the first quarter as the Rangers jumped out to an early 18-12 lead.

Register added six more of his game-high 27 in the second quarter and Dylan McDonald found his stroke and drained a pair of 3s as the Rangers extended their lead heading into the locker room.

“We did basic things that we’ve been coaching them up to do,” Vespa said of the first-half run. “We made shots and shared the basketball and made the simple plays. No one tried to do anything too much. We really believe if you share the ball and find the right person then good things will happen and that’s what happened for us.”

Lake Catholic intensified its defensive pressure in the third quarter and that led to some run-outs and open baskets.

Led by Peyton Budrys-Rini, who finished with 27 points and four 3-pointers, the Cougars drained five 3s in the third quarter as they began chipping away at North’s lead.

The Cougars also converted on 13-of-17 free throws in the second half to make a run at the Rangers.

“They came out and definitely amped up the pressure in the second half and we were able to hold on,” Vespa said. “That’s not a position we’ve been in often. We’re usually the ones trying to fight and claw our way back into the game instead of being the ones that have to hold the lead. We were trying to figure out that balance of playing smart but not playing scared or tentative. We gave them every opportunity to come back and they played their butts off until the end but we were able to pull it out.”

Register also pulled down double-digit rebounds to record a double-double for the Rangers. He has scored 26 or more points in his last four games.

“He was just News-Herald Player of the Week and a lot of times guys will relax a little bit but I think for him, he’s stepping it up even more,” Vespa said.

Dylan McDonald, Jaheim Turney, and Noah Adams also scored in double figures for the Rangers with 19, 14, and 12, respectively.

McDonald scored 10 points in the first half as the Rangers were building their lead and then he added 10 points with two 3-pointers in the fourth quarter to help North seal their win.

“He was knocking down 3s and hit from the free throw line,” Vespa said. “He gave us a real spark. He’s a guy that does really well in practice and tonight he was able to step up for us. It was good to see.”

North heads to South on Friday for a rivalry game against the Rebels.

Patience pays off for Blue Devils