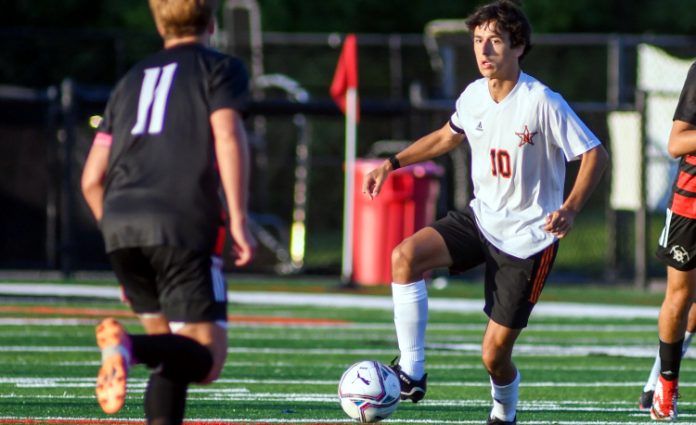 Dom Kustura scored a pair of goals in leading North to a 3-1 win over previously unbeaten Kenston on Tuesday.

With the win, North improved to 4-4 overall and remained tied for first place in the Western Reserve Conference with a 2-0 mark. The Rangers also improved to 3-6-3 against the Bombers since 2004.

“That was big,” said North coach Steve Misick. “We never play well there but we were on task.”

North took the lead midway through the first half when Dan Tadic crossed a ball in Abram Gutierrez’s direction.

“Dan hit probably a 40-yard diagonal ball from the right wing to the far post and Abram happened to be there and outjumped two guys for a perfect head ball into the corner,” Misick said. “That was one of the most beautiful goals I have ever witnessed. They couldn’t do it again if they tried.”

Kustura scored his 10th goal of the season a few minutes later by taking a pass from Floyd Lomis and then he cut through the Kenston defense and beat the goalkeeper in a one-on-one situation.

“He dribbled around a couple of defenders right up the gut and beat the keeper,” Misick said.

The Rangers took a 2-0 lead into the break and in the second half, Kustura and Gutierrez teamed up to make it 3-0.

Kenston scored on a penalty kick in the closing moments of the game.

North now controls its own destiny in terms of winning the WRC title.

The Rangers host South in a battle of conference unbeaten on Tuesday and then will have league games remaining against Madison, Riverside, and Mayfield.

“This was a big win,” Misick said. “I kind of thought Kenston was the team to beat in the league this year and they may very well still be, but there’s a lot of games left to play. They have a loss now, which is huge for us because we’re still unbeaten, and Mayfield has a loss and Riverside has two losses, so we’re in good shape.”

North has now won four of its last five games after starting the season 0-3.

“We had a tough start but we played quality opponents and I think that matters,” Misick said. “It helped us find our way and correct our mistakes and that showed up against Kenston. We’re really focused and our bench is a little bit deeper. It’s all coming together.”

Athletes from Berkshire, Cardinal, Chardon and Madison have been recognized as the Varsity Travel Players of the Week for the week ending Oct. 15, 2017.

Rangers wake up to down rival South