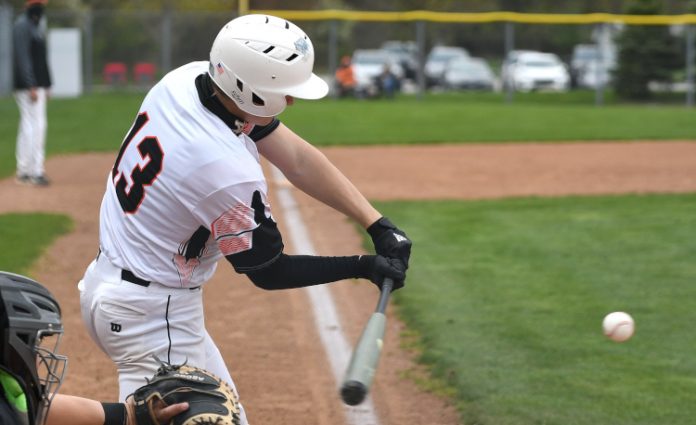 Trailing 8-0 in the fourth inning, North pulled off a remarkable comeback to defeat visiting Mayfield in a Western Reserve Conference showdown on Wednesday, 20-10.

The Rangers scored 15 runs in the bottom of the fourth and responded to Mayfield’s two-run fifth with a five-run inning of their own to invoke the run rule.

Mayfield won the series opener on Tuesday, 5-4, and jumped out to a 6-0 lead in the first inning on three hits, two walks, and two hit batters.

The Wildcats added two unearned runs in the fourth.

In between, the Rangers collected seven hits, six walks, one hit batsman, and one batter reached on an error.

“They took their starter out and they made some changes in their lineup, and rightly so,” Iveljic said. “It was 8-0 at the time in the fourth inning and I’m sure they wanted to get some guys extra time. We just started putting some things together and having much better at-bats. We were going deeper into counts and forcing them to make pitches. We just kind of took advantage of everything in the inning, which was very uncharacteristic of Mayfield. When you saw the snowball rolling it was like, ‘Holy cow, let’s just keep it going.”

A walk and a two-run homer in the fifth allowed Mayfield to cut North’s lead to 15-10, but the Rangers added five runs in the bottom half of the inning to seal their improbable win.

Sean Register started that rally with a leadoff single and the Rangers went on to score four runs before the Wildcats recorded the first out.

A fielder’s choice and two walks preceded a strikeout and then a walk and a hit batsman set the stage for Trent Bucy’s walk-off double.

“After (Tuesday’s game), and even after Riverside, our message was to finish,” Iveljic said. “We haven’t done that against Riverside or against Mayfield. We just couldn’t finish, so that was the message coming in and the kids took it to heart.”

Bucy had a huge day for the Rangers. He was 3-for-5 with a double and knocked in five runs. Register also recorded three hits and Owen Hopper finished the game 2-for-3.

North finished the game with 11 hits and the Rangers drew 11 walks.

Bo Vinson started the game but last just 1/3 of an inning. He allowed five earned runs on two hits. Jacob Henderson threw 2 2/3 scoreless innings to allow the Rangers the time to get back into the game. Henderson allowed just two hits and struck out four.

“It was great because we called on guys that hadn’t really pitched a lot,” Iveljic said. “They pitched a little bit in the preseason and at the beginning of the year. Jacob Henderson came in and pitched well. He came in and just worked the hitters. He doesn’t throw very hard but he has a good off-speed pitch and locates his pitches. Blane Schmidt came in and did what he needed to do to keep them off balance a little bit and keep us in the game, especially after we scored the 15. It was great to see.”