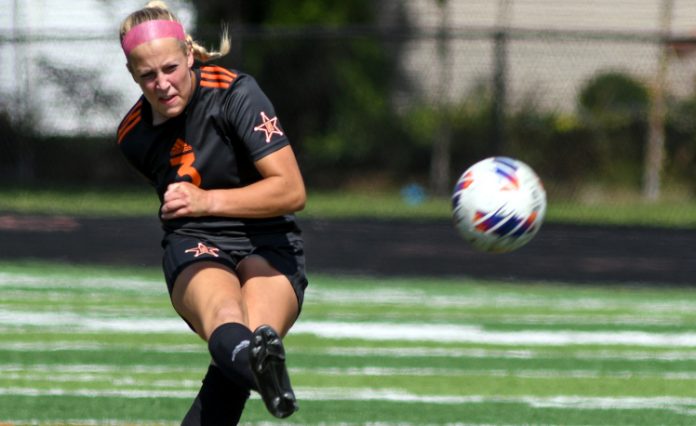 Morgan Bell scored on a long free kick in the first half to secure North’s 1-1 draw at Lake Catholic on Thursday.

The host Cougars scored four minutes into the second half to tie the game at 1-1.

“We have had a bit of a rough patch but it was a good sign to see the girls work through it and get a result that I don’t think they could have achieved at the start of the season,” said North coach Rick Sirl. “There is a toughness and resilience that is starting to show itself across the team. There is also a drive to work through setbacks that were not there in the recent past that keeps this team focused and believing they belong in these games now. The next step is to zero in on the finishing across the board. We have kept ourselves in games but need to learn what it takes to close them out and turn tied loses into ties or wins.”

North started the season with three straight wins but has since gone 0-4-2 with back-to-back losses, so a result was needed to right the ship.

“It was very important to end that streak and bring our heads up with a tie,” Bell said.

Bell lined up her free kick at midfield.

She had hoped to set up Sydney Helm with a scoring opportunity but instead had her ball take a fortuitous bounce over the Lake Catholic keeper’s head and into the back of the net.

“There was a penalty on Lake Catholic on the 50,” Bell said. “I set the ball and I hit it, looking for Sydney Helm. The ball took a bounce right over the goalie and went in.”