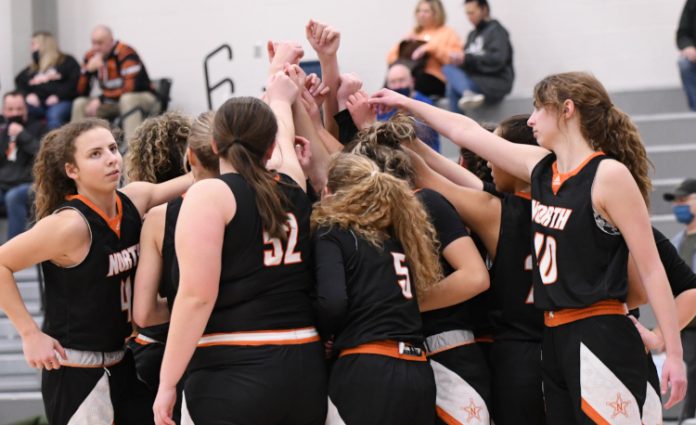 The Rangers rode their defense to a 54-34 win at Aurora on Saturday and extended their winning streak to nine straight games.

“We talked a little bit beforehand about the fact that we had just played a conference rivalry game and we have three conference games coming up this week,” said North coach Paul Force. “We talked with the girls about making sure we are in the moment and make sure we’re focused on one day and one game at a time.”

North used a 38-6 run from the middle of the first quarter through the third to pull away from the Greenmen.

“Credit to Aurora,” Force said. “They were without one of their top scorers but they came out and jumped on us. In both films I watched I saw them do the same thing. They came out and got early leads but I thought we did a good job of settling in once two or three shots went down. Late in the first quarter, we were able to take the lead and then we shot the ball pretty well all night, which helps in basketball.”

Aurora’s Ava Ryncarz led the Greenmen with 17 points. She found early success before the Rangers intensified their defensive efforts and slowed her down the rest of the game.

“She was averaging about 20 points a game but after the first couple of possessions we were able to find her a little bit better,” Force said. “We also were able to rebound the ball with them. They’re a lot bigger than us and a very physical team so it was a challenge on the boards.”

Dori Siekaniec scored just two points for the Rangers but she was tasked with slowing down Aurora’s top scorer and she was effective throughout the game.

“I knew my team had my back and created layers for when she was to drive, so I had the confidence to get up and make it tough for her to do what she wanted to do with the ball,” Siekaniec said. “We knew that she had the ability to shoot and attack, so I focused on being up on her and making it difficult for her to get a shot off. If I got beat off the dribble, I knew my team was going to be there to help on her.”

“Everybody contributed and shot it well,” Force said. “Kailey made a bunch of shots and Cece shot it well and had a good floor game.”

With the win, North improved to 10-1 overall. The Rangers travel to Chardon on Tuesday.