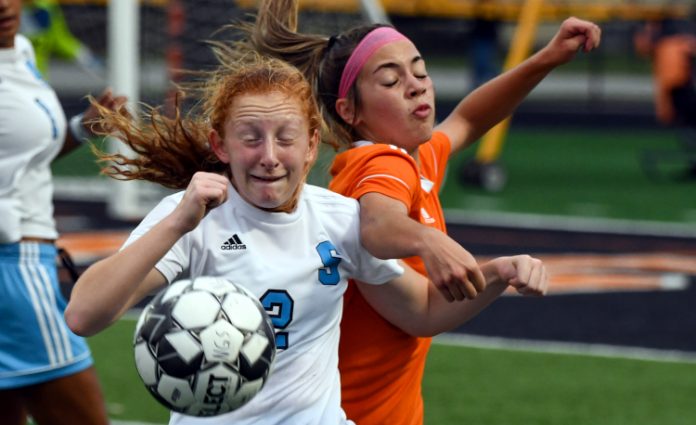 EASTLAKE—North honored its seniors prior to Tuesday’s rivalry showdown with visiting South at Nick Carter Stadium. The Rangers then went out and rewarded their seniors with their first win over the Rebels, 2-1.

“This may be one of the best feelings I have had as a coach to date,” said North coach Rick Sirl. “Seeing seniors who have never had a win over South not only finally get that win, but do it on their Senior Night was special, to say the least.”

Senior Lillie Washburn gave the Rangers a short-lived 1-0 lead when she slotted a shot into the upper right corner of the net with 9:41 remaining in the first half.

“I had a lot of chances on goal early in the first half,” Washburn said. “A little later into the first half I noticed there was a lot of defenders in the box so I stayed open right outside the 18-foot (box). Michaela Herbert was aware of this and played me a ball. I was thinking about before the game my coaches were telling me to slow down when I shoot and focus on getting my hips on target. I did just that and the ball went right over the goalie, upper right. I’m so glad that I have the coaches that I have this year they continue to coach me and give me confidence on the field. We’ve come a long way this year; we can keep this up if we just follow our system.”

Washburn, who now has two goals this season, was thrilled to pull out her first win over the Rebels.

“Beating South is something I’ve never experienced in my high school career,” Washburn said. “I am ecstatic that the team stepped it up tonight to get the win. It was so exciting to finally win against South after not winning for (six) years, especially on Senior Night. Our last North-South game will definitely be one to remember.”

North’s lead was short-lived as the Rebels scored their first goal of the season two minutes later to push a 1-1 lead into the break.

Sophomore Morgan Bell delivered the decisive goal in the second half when her pass off of a free-kick took a fortuitous bounce over the South keeper’s head and into the net.

“I was trying to get it to go to my teammate by the goal and it bounced right over the goalie and went in,” Bell said. “It feels really good. We haven’t beat them in many years. Our team pulled together to get the win.”

With the win, the Rangers improved to 6-4 on the year and extended their winning streak to three games for the second time this season.

“We have a really young team,” Washburn said. “I’m so proud of them and what we have done this year. They continue to do better after every game. We still have some issues and skills we all need to work on but I know we can continue to push through and keep this streak going. I couldn’t ask for a better team for my senior year, they are family to me.”