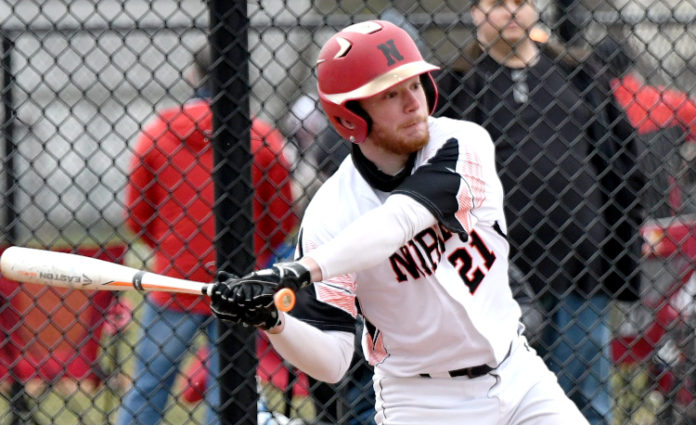 After a 10-0 start, North hit a rough patch in its schedule but the Rangers started their stretch run to the postseason with a 6-4 win over visiting Riverside on Wednesday.

With the win, the Rangers improved to 14-7 overall and 7-5 in the Western Reserve Conference.

“They’re very important,” said North coach about the Rangers’ remaining regular-season games. “We just have to make sure that when the playoffs get here we’re running full steam ahead and have everything figured out. That’s the most important thing, to try to hit the ground running that week of playoffs, so these games are really important to make sure you’re in the right place.”

Matt Barner keyed the North win, both at the plate and on the mound.

Barner’s RBI double in the fifth sparked a three-run rally that gave the Rangers a 5-2 lead they wouldn’t relinquish. He also picked up the pitching victory after allowing two earned runs on five hits with six strikeouts.

“He was solid,” Stahlberg said. “He’s just a gamer. He goes out there and he’s pumped up every pitch and he’s intense. He’s fun to watch because of that intensity and the other players rally behind him. When he brings that intensity, it kind of seems to pull everybody along in that same direction. They all kind of meet him there as well. It’s awesome that he has that presence out there.”

A double and a single gave the Beavers an early 1-0 lead in the top of the first.

North went ahead 2-1 in the second when Trent Bucy singled and scored on Joey Skolny’s base hit. Chase Federer also singled and Skolny later scored on an error.

A single and a three-base error allowed Riverside to pull even in the third but the Rangers took the lead for good in the fifth.

“It’s really key to put more wins together because as a team, we work best when we have momentum on our side,” Barner said of pulling out the victory. “We feed off of win streaks and everyone’s mindset is in a good place when you’re winning ball games.”

John Lanning started the rally when he reached on an error with one out in the inning. C.J. Newman then drew a walk and Barner doubled home Lanning for a 3-2 lead. Newman scored on Bucy’s sacrifice fly and Devo Britsky singled home Barner, who finished the game 2-for-3.

“When I’m pitching really well it makes me feel confident about every aspect of my game and confidence is key with everything,” Barner said. “It makes everything a lot easier and makes me hit better because I trust myself, but I also owe credit to my teammates and coaches who help build my confidence. Without them, I wouldn’t have as such high confidence as I do.”

Riverside scored on a run on three walks and a hit batsman in the sixth and another in the seventh, but Barner and Brody Spock, who pitched the final inning, kept the Beavers from doing too much damage.

“My fastball was working really well tonight,” Barner said. “I was able to locate the ball really well and just get my teammates involved and get them some action. I trust my teammates enough to leave it in their hands to get the outs for me.”

North travels to Riverside on Thursday.

Rangers off to good start