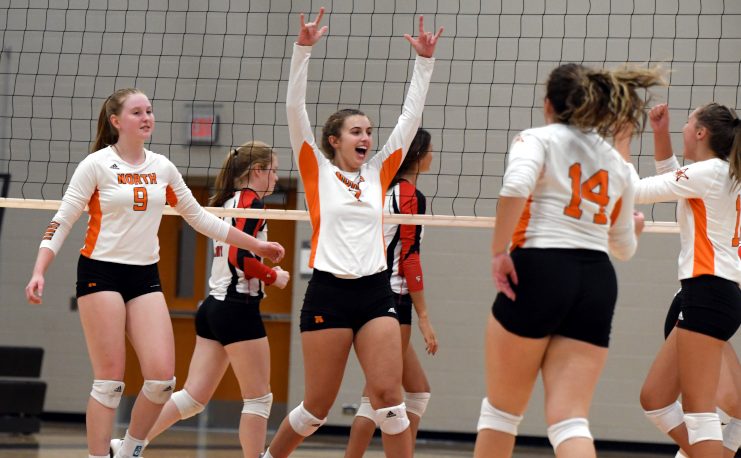 EASTLAKE—North’s offense was efficient and its defense protected its home court in a 3-0 sweep of visiting Perry in a nonconference match on Monday.

“That was a high-emotion game too because we know a decent amount of players over there and we know the coach from a lot of girls playing club at Rock City and he coaches there,” said North coach Tamara Heller. “The emotions were high and in the past, when emotions were high, we have struggled but tonight we held our composure and played really good.”

North opened the season with four straight wins and then suffered through a four-match skid before winning two straight.

Heller and the Rangers regrouped after their fourth loss and have focused on their confidence and effort.

“From a coaching standpoint, we were just trying to eliminate a lot of pressure,” Heller said. “We don’t really thrive in pressure situations yet, so I’m trying to relieve as much pressure as we can to just simply play volleyball and only worry about having fun with each other out there. Rather than worrying about so much of the Xs and Os, we’re trying to simplify things a little bit.”

That approach paid off as Jaiden Anderson recorded 38 assists in dishing the ball around to her hitters.

“This was a team win for us,” Heller said. “Offensively, we did well but on defense, we were scrappy. I think a lot of that starts with Sam. She’s such a safe-haven person for us. If the ball goes there, I’m almost already looking to the next play because I feel so secure with her back there.”

The Rangers have regained their confidence and they’ll need it as they jump right back into league play with a match against Riverside on Tuesday.

“I think this did a lot for our confidence,” Heller said. “Riverside is going to be another high-emotion game because (Riverside coach) Jess (Marut) was with us last year as an assistant and the girls know her. I’m just hoping we keep our composure.”