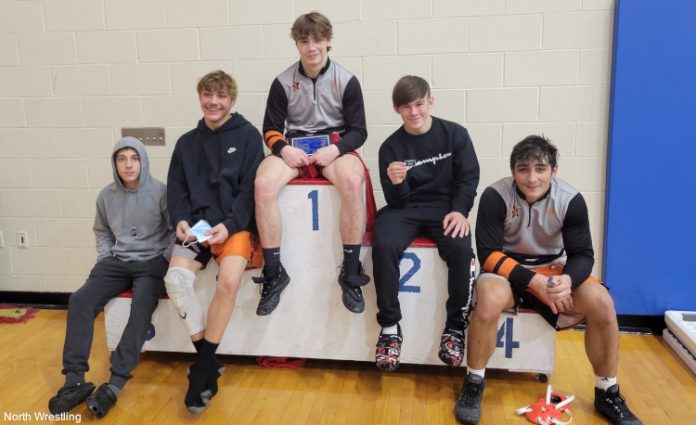 North senior Ethan Smith claimed an individual title in leading the Rangers to an 11th place finish at the 56th Annual Kenston Invitational Tournament on Wednesday.

Smith was one of five Rangers who earned a spot on the podium.

“I was satisfied with how I performed and how it turned out,” said Smith. “It was my first tournament all year and I only practiced one day in two weeks prior to that tournament.”

Smith transferred to North from Lake Catholic where he was 81-10 and a two-time state qualifier over the past two seasons.

He made quite an impression in his Ranger debut.

Smith recorded a technical fall, a pin, and a major decision in winning the 157-pound bracket with a 4-0 record.

“I knew that my stamina might have come to be a problem in the tournament, so I focused on my breathing a lot during my matches making sure my warmup was really good,” Smith said.

With one tournament win under his belt, Smith is eager to put in the work in order to make a return trip to the state tournament later this winter.

“Good start for the year (and to) get back to the tournaments because last year was basically all duals,” he said. “I know I still have my skill and I have things to work on from here on out. I can only get better.”

Nick Beck finished fourth at 215 pounds but he did the hard way after dropping his first match of the tournament. He bounced back from that 7-5 loss with five straight pins before falling to South’s Dom Vittori in the third-place bout, 8-6.

Joey Nowosielski was 3-3 on his way to a sixth-place finish at 150 pounds and Drake Martinez and Derick Martinez both went 3-2 in finishing seventh at 120 and 138 pounds, respectively.