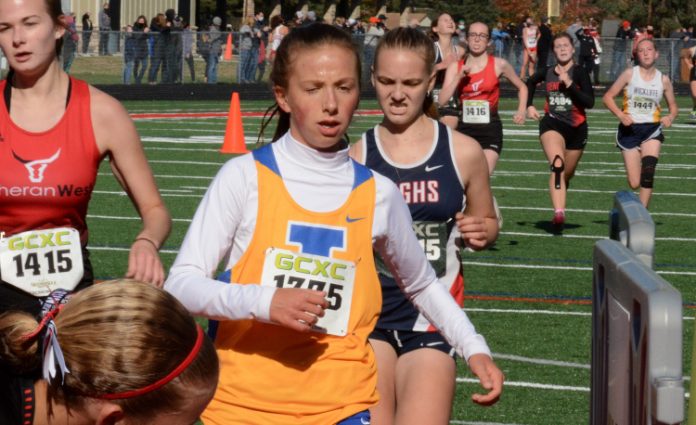 Nowak placed third overall to lead the girls’ team to a fifth-place finish while McGovern was eighth for the boys’ team, which finished fourth.

“It was an adrenaline rush getting out and racing today,” Nowak said. “I had been looking forward to the meet for a while. The team has been training and pushing each other all summer long, so it was good to get out and run against new competition again.”

“My goal was to stay out in the front pack throughout the whole meet and I accomplished that,” she said. “I was happy with my time today as it was my high school PR. However, my goal is to keep chopping away at that time and make it onto the leaderboard for top times, so I am hoping to break 21:11 this season.”

As she did last year, Nowak again is competing in both cross country and soccer this fall. Playing multiple sports in one season is never easy but the conditioning has paid off in the past and she’s hoping to have another successful season this fall.

“Competing in both soccer and cross country makes me a better, stronger athlete for both sports,” she said. “Putting in long miles for cross country increases my stamina for an 80-minute soccer game, and sprinting and being aggressive on the soccer field carries over to my mental strength for cross country. It’s a lot to put time and effort into both sports but after one year of that under my belt, I feel prepared for a successful season in both sports.”

Gabby McGreevy also placed among the top 25 for the Independence girls’ team. She finished 22nd with a time of 24:45.

McGovern, who finished at 19:42, also was thrilled to hit the course again.

“It definitely felt refreshing to get back into racing, especially so because the Hawken course was where we had our conference meet last year and it was nice to be able to compare the two races through factors such as weather, schools who attended each meet, and the current points in each season,” he said. “I’d say I’m relatively satisfied with my time. There’s definitely room for improvement and I’ll need to keep putting in the time and effort if I hope to achieve my goals for this season, though I hope to do better in future meets and keep dropping my times to below where they were at the end of last year. I think the meet this weekend was a good start to the season and provides a solid base to improve on.”

McGovern also is a two-sport athlete as he also suits up for the Blue Devils’ boys’ soccer team, which has slowed his progress on the cross country trail.

“As of now, I’ve been fitting in my cross country training around my soccer practices and games,” he said. “This has been a challenge, but in order to place better and keep decreasing my time, I’m going to have to set aside more time for my runs as well as increase the pace at which I do them.”

Rebels down North in rivalry game