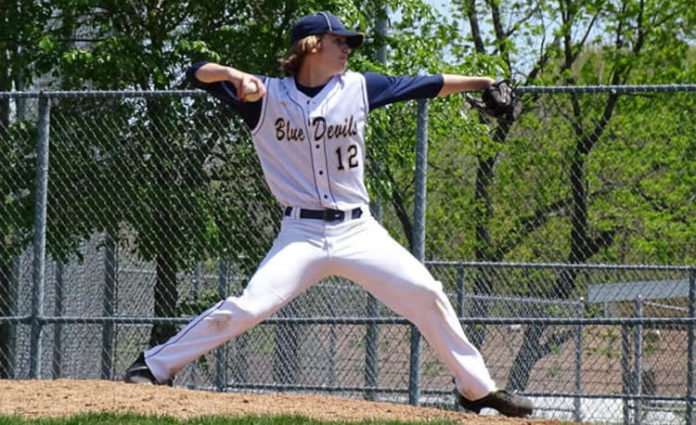 Several athletes from area schools have been named the Ohio Varsity Athletes of the Week for the weeks ending May 2.

All statistics incurred during the week beginning April 26 and ending on May 2.

Name: Shaun Derganc
School: Wickliffe
Grade: 10
Stats: 2-0 on the mound with 10 strikeouts in seven innings with one earned run allowed on seven hits with one four walks; batted .385 (5-for-13) with a double, three RBI, and four stolen bases
Coach’s Quote: “Our team is decimated by injuries and Shaun has responded well on the mound for us,” said Wickliffe coach Phil Motta. “Shaun is developing on the mound and is starting to respond and trust himself and his coaches. This week, he had two quality appearances and stepped up in both games. Against VASJ, Shaun got out of several jams and battled on the mound to get out of two bases-loaded threats. Shaun has solidified himself in our rotation as a go-to pitcher. He is only a sophomore but has accepted the challenge and continues to improve.”

Name: Charlie Greenlief
School: Chagrin Falls
Grade: 12
Stats: Batted .462 (6-for-13) with a double, four runs scored, and three RBI; threw out two of four attempted base stealers
Coach’s Quote: “Charlie has a lot of respect from both his teammates and the coaching staff as he was voted one of our captains,” said Chagrin Falls coach Michael Sweeney. “He is more of a quiet leader, but that doesn’t mean he isn’t extremely competitive. Charlie battled through some injuries earlier in the season which caused him to get off to a little bit of a slow start, but now he is rolling. Not only has he been swinging the bat well, but he has the tough task of playing both shortstop and catcher depending on who we pitch and he has been outstanding. I will see Charlie out in the cages during his lunch almost every day hitting.”

Name: Sydni Bush
School: Mentor
Grade: 11
Stats: Batted .833 with a home run and no strikeouts in two key conference wins
Coach’s Quote: “Syd has been stellar for us all season,” said Mentor coach Jo Bondra. “She is a threat offensively and she is solid behind the plate. She worked hard to get in the starting lineup and has more than proved herself during this season.”

Name: Eva Luenger
School: Lutheran West
Grade: 10
Stats: Batted .500 (5-for-10) with three runs scored, a home run, two RBI and an .800 slugging percentage; Allowed 14 hits and 15 earned runs in nine innings with nine strikeouts
Coach’s Quote: “Eva has really stepped up as a first-year varsity player,” said Lutheran West coach Amy Sullivan. “She is consistent regardless of where she is playing. Her pitching is improving every game and her fielding is top-notch. She has moved to our leadoff spot in the lineup and has done a great job. Eva is a calm, quiet leader and I am so excited to have the opportunity to watch her grow as a player.”

Name: Sarah Sutton
School: Chardon
Grade: 10
Stats: Batted .476 (10-for-21) with two triples, two home runs, six runs scored, six RBI, and 11 quality at-bats in 22 plate appearances
Coach’s Quote: “Sarah locked down the right side of our outfield and after moving to the leadoff batter, she has hit the cover off the ball,” said Chardon coach Stewart Landies.

Name: Keira Williams
School: West Geauga
Grade: 12
Stats: Batted .444 (4-for-9) with a 1.000 slugging percentage, two doubles, one triple, three runs scored, one RBI, and two walks; Posted a 2.80 ERA with a 1-0 record and two strikeouts
Coach’s Quote: “Keira is a multi-talented player who excels wherever she plays,” said West Geauga coach Bob Leppla. “She hits for power and is a constant RBI threat with her patience at the plate. In addition to her great talent is her total team demeanor; she will play anywhere and excel at it.”

Name: Reilly Greenlee
School: Kirtland
Grade: 11
Stats: Finished runner-up in the 4×80 and third in the 1600 and 3200 at the Potopsky Invitational; won the 4×1600, 4×800, and distance medley, and placed third in the shuttle hurdles at the Cuyahoga Heights Relays
Coach’s Quote: “Reilly had a really good week on the track at two big invites,” said Kirtland coach J.P. Moran. “She had a full load of work both meets and came through for the team each time out. Her performance at the Cuyahoga Relays got her a nomination for the meet MVP, which her teammate ended up winning, but her performance was right there with Julie (Namciu).”