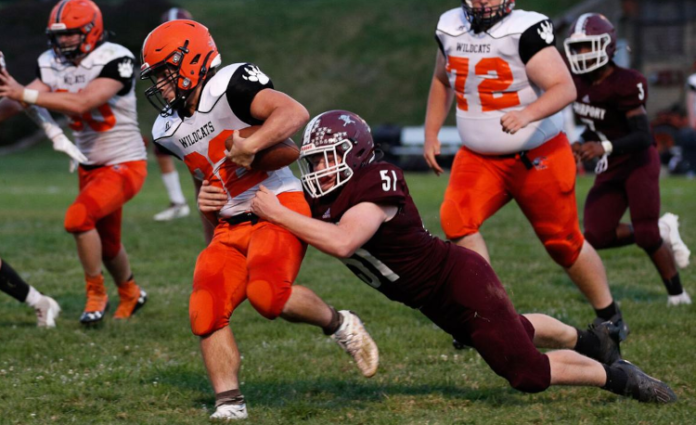 Athletes from eight different schools have been named the Ohio Varsity Players of the Week.

All statistics incurred during the week beginning Aug. 31 and ending on Sept. 6.

Name: Joey Grazia
School: Kirtland
Grade: 12
Stats: Recorded five tackles, seven passes defended and returned an interception 28 yards for a score
Quotable: “On film, I saw that he skootched in a little bit when he runs his out route,” Grazia said of the receiver he was assigned to cover. “He did that exact thing and I was 99-percent sure he was running that. We were talking about it all week how I think I I’m going to get one and I stepped in front of it and took it to the house.”

Name: Dominic Knesebeck
School: Fairport Harding
Grade: 12
Stats: Recorded 15 tackles, including seven for a loss, and a sack and forced three fumbles; also recorded six pancake blocks and paved the way for a 250-yard rushing performance
Coach’s Quote: “Dominic has been with the program for four years and he has worked his way to become a great football player and leader,” Fairport coach Cameron Ruff said. “His teammates elected him as a team captain and he has been our player of the game for the first two games. He has dominated on both sides of the ball, already tallying 13 pancake blocks on the offensive line, 29 total tackles, and nine tackles for loss on defense. He has gained strength, size, and speed each of the past four years and he displays his physicality at full force.”

Name: Eddie Lewis
School: Lutheran West
Grade: 11
Stats: Ran for 240 yards and three touchdowns on 20 carries
Coach’s Quote: “Eddie Lewis had a great game in our 51-20 victory over Westlake,” Lutheran West coach Frank Petroff said. “Eddie is a football player who never comes off the field for the Longhorns. He excelled on the defense side and returning kicks for the special teams.”

Name: Kyle Zygmunt
School: Independence
Grade: 11
Stats: Ran for 101 yards and a touchdown on 10 carries and completed three passes for 90 yards with a score
Coach’s Quote: “Kyle stepped in at the last minute at QB and led the offense to 36 points, combining for 191 yards in rushing and passing and 2 TDs,” Independence coach Rick Adams said. “Kyle also started at free safety, where he helped break up three passes and made one solo and one assisted tackle.”

Name: Haylee Winfield
School: Madison
Grade: 12
Stats: Became the third Madison player ever to score against Lake Catholic
Coach’s Quote: “Prior to last Friday, only two players in our program had ever scored a goal against Lake Catholic; now that number is three,” Madison coach Chad Butler said. “Haylee battled through the Lake defensive line to slot one into the net with strong, physical play. Thankfully, she has made a habit of scoring goals in historic situations over the past few years.”

Name: Delaney Tucek
School: Berkshire
Grade: 12
Stats: Recorded 64 digs with eight service points and exceeded goals on serve receive in two matches
Coach’s Quote: “Both victories were total team efforts but Delaney’s performance and leadership in both victories helped us tremendously,” Berkshire coach Joni Prots said. “The Cardinal match was our Senior Night and Delaney, along with the rest of the seniors, worked so hard from start to finish to bring home the victory. Delaney’s hustle and reading on the court will not show up in any statistical categories but is essential to what we are able to accomplish as a team.”

Kirtland hangs on for win at Independence