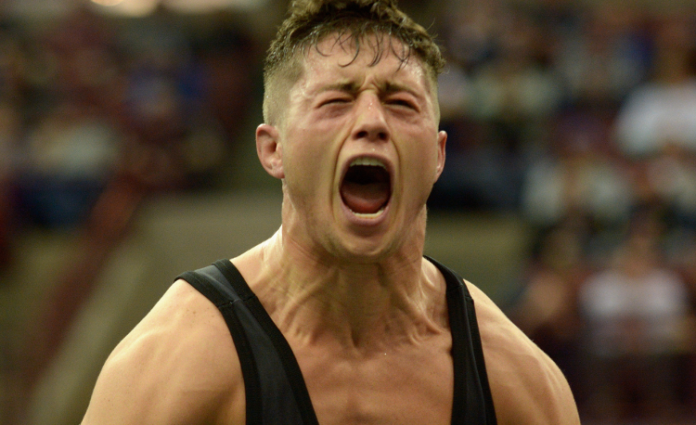 OPINION: Get radical to save wrestling

Following last weekend’s state wrestling championships the casual wrestling fan might not notice a problem exists within the wrestling community.

After all, the best of the best in the state displayed their talents in front of 53,401 fans over the three-day event at the Jerome Schottenstein Center at Ohio State University. Two wrestlers claimed their fourth state titles, pushing the number of four-time state champions to 31 and local wrestler Kevon Freeman of Lake Catholic became Ohio’s 69th three-time state champion.

There is no shortage of elite talent in the state but what is missing is the depth the sport used to enjoy.

Heck, even attendance at the state meet is down.

Last year, the OHSAA recorded a record 63,777 fans who took in the state tournament and 2018’s attendance is the lowest in at least six years.

But, that’s not the real issue facing the sport. The problem is declining numbers at nearly every program not named St. Edward, St. Paris Graham or Brecksville.

Ask any high school coach whose high school graduation occurred before 1990 and he’ll tell tales of packed gyms on Friday nights for a dual meet between two teams with full rosters, both varsity and JV.

This winter, I covered a dual meet that included just four matches. The other 10 weight classes were forfeited.

It’s not just a small school issue either.

Sure, there is talk of combining sectional tournaments in the future but that is applying a Band-Aid to a gaping wound.

Instead, it’s time to look at some radical ideas to stimulate the sport.

There are no easy solutions to recruit new athletes to the sport and the fix isn’t going to happen overnight.

In the immortal words of Roadhouse bouncer John Dalton, “It will get worse before it gets better.”

It starts with recruiting new wrestlers.

WRESTLING IS A PERFECT COMPLEMENT TO FOOTBALL

Obviously, recruiting new wrestlers begins with the youth programs but we’ll stick to what needs to be done at the high school level.

More and more, we’re seeing football players and other fall sports athletes bypass a winter sport to “work out.”

Hall of Fame college football coach Tom Osborne won multiple national championships at the University of Nebraska. His success was due in part to recruiting the right type of athlete and he had a soft spot for elite football players who also wrestled.

“Wrestlers make coaching football easy, they have balance, coordination, and as a coaching staff we know they’re tough,” Osborne once said.

Osborne isn’t alone in his praise for football players who also wrestled.

“I would have all of my offensive linemen wrestle if I could,” said Hall of Fame NFL coach John Madden.

“I draft wrestlers because they are tough,” said NFL Hall of Fame coach Joe Gibbs. “I have never had a problem with a wrestler.”

“I’m a huge wrestling fan,” said college football coach Bob Stoops. “Wrestlers have so many great qualities that athletes need to have.”

They all have been inducted into the NFL Hall of Fame and were high school wrestlers. Dozens and dozens of other current and former NFL players wrestled in high school, which leaves a question begging to be answered: Why aren’t more high school football coaches urging their players to wrestle in the offseason?

Last week, I shared a story of the two wrestlers competing for the 220-pound championship at the Division III Garfield Heights District. Both wrestlers, Pymatuning Valley’s Gage Willis and Mogadore’s Paul Skye, were undefeated and both were All-Ohio linebackers.

On Saturday, several football players won state championships in wrestling and many others placed including Wadsworth’s Joey Baughman, who became a four-time state placer after finishing third in Division I.

Baughman originally committed to continue his education and wrestling career at the University of Virginia but later changed his mind and now will play quarterback at Elon University in North Carolina.

High school football coaches, those who have reached the pinnacle of your profession have provided you with the path to success. You’ll heed their advice when it comes to designing your game plans, why not listen when they tell you that your football players will become tougher and more versatile by wrestling?

In talking with high school wrestling coaches throughout the year it’s obvious the point system isn’t beneficial to increasing participation.

According to state rules, “a high school team and/or wrestler may participate in a maximum number of regular season contests worth 20 points. Any and all matches wrestled by an individual shall count toward the team’s point limitation of 20 points.”

That rule puts coaches in a difficult situation as they have to both prepare their quality wrestlers for the postseason while simultaneously putting their newer and lesser skilled wrestlers in the same events.

Instead, each wrestler should be permitted to participate in a maximum number of regular season contests worth 20 points. Strike the last sentence of that rule: “Any and all matches wrestled by an individual shall count toward the team’s point limitation of 20 points.”

Doing so would allow coaches to send their quality wrestlers to the more competitive tournaments while allowing their new and lesser skilled wrestlers to compete in more dual meets or pool tournaments.

Remember when I said it’s time to consider some radical approaches to save wrestling? Here’s an idea to solve some of the problems coaches face during a dual meet and one that could add additional excitement and strategy to a head-to-head showdown between two teams.

It’s time to allow wrestlers to compete in two weight classes during a dual meet.

Going back to the dual meet I covered that saw just four matches wrestled, allowing wrestlers to compete in two weight classes would help to alleviate that problem.

Now to the exciting part.

North and South meet for their annual rivalry wrestling match. Prior to the match, the referee meets with the team captain then flips the disc and North, the visiting team, called red. The disc landed with green facing upright giving South first choice.

South determines it wants its choice for the odd matches, meaning South will determine the first weight class to be wrestled and its wrestler in that match will have his choice of starting position in the second period.

After that first match is wrestled, North would then determine the second weight class to be wrestled. South would choose the third weight class, North the fourth, and so on.

This new, and radical, format would allow coaches to fill more weight classes. It also adds more strategy to a dual meet.

Each team would alternate in choosing which weight class to send out to the mat. That allows each coach to use a strategic approach to putting his wrestlers in the best position to win the dual meet.

In playing Devil’s Advocate, sure, a coach with several elite wrestlers could use that to his advantage by having each of those wrestlers compete twice while other wrestlers sit on the bench. But, that’s where the strategy comes into play on the other side of the mat. Opposing coaches would need to send out wrestlers at the back-to-back weight classes as soon as one of the elite wrestlers completed his first match, thereby taking that wrestler out of play for a second match.

Coaches, what else can be done to help the sport? Speak up…save your sport.

August 15, 2022
Wickliffe enters the 2022 season with its usual high expectations and with eight returning starters the Blue Devils are positioned to meet their lofty goals.