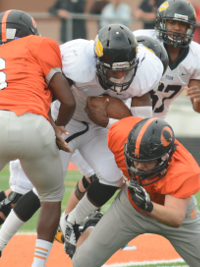 A lightning storm forced Beachwood and Orange to conclude the final six and a half minutes of their Friday night game on Saturday with the Bison awaiting the kickoff following a Lions touchdown that cut Beachwood’s advantage to 31-26.

The host Lions stopped the Bison on fourth-and-four at the Orange 14 then drove 86 yards in just over two minutes to pull out the 32-31 victory.

After Orange’s kickoff went out of bounds, the Bison took over at their own 40.

On third-and-1 at the 50, Tyler Nash recovered a fumble and returned it to the Orange 25 for a Bison first down. A fourth down incompletion gave the Lions the ball at their own 14 with 2:25 left in the game.

“We ran right down the field and did what we had to do,” Gibbons said. “We had some luck on our side when we fumbled the ball and he scooped it up and ran for a lot of yards there. We jumped off sides there and that backed us up to third-and-10. We’ve got to find a way when we get down in the red zone, that’s on me, we’ve got to be able to run the ball there and get first downs and run the ball there and get touchdowns.”

Orange quickly advanced the ball up field behind Dajuan White, who picked up 14 of his 66 yards on his first two carries of the drive.

Stephen Borgman then threw a 29-yard pass to Chris Von Hendrix to set the Lions up first-and-10 at the Beachwood 26 with just over a minute to play.

Borgman, who completed 18-of-24 passes for 178 yards, ended the 11-play, 86-yard drive with a five yard touchdown pass to Lamar Dixon with just 12 seconds to go.

Beachwood dropped to 0-2 on the season but Gibbons let his players know there are a lot of games left to be played and a win against Elyria Catholic on Saturday would get the Bison back on track.

“I said if we win next week we’re in the same boat we were in last year,” he said. “We’d be 1-2 heading into league play and anything can happen. It’s still early in the year. Teams start off 0-2 and they find a way to bounce back all the time and make a run. We just have to learn how to finish games. That’s the biggest challenge.”