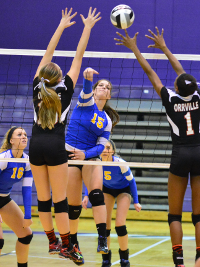 Orrville won the first set, 25-13, and then held off the Blue Devils in games two and three to win the match, 3-0. The loss ended Independence’s school-best season at 23-2.

“I’m very proud of them,” said Independence head coach Megan Osysko, who has guided the Blue Devils to two regional appearances in her two seasons at her alma mater. “We won some really big matches this year against Magnificat, Huron and taking our Rene Roche Invitational. We were back-to-back conference champs and district champs; that’s a long resume for the year. I’m very proud of what they accomplished. It was a very good team. I’m just sad it had to come to an end.”

The Red Riders, who improved to 26-1, won the second set, 27-25, and the third, 25-23. They’ll play Gilmour in Saturday’s regional final with the winner advancing to the state Final Four.

Orrville broke open the first set with the powerful hitting of juniors Trinniti Hall and Aleah Stauffer. That kept the Blue Devils from mounting a counterattack.

“They have obviously two great hitters,” Osysko said. “Their team was able to keep the ball off the floor. We needed some more touches at the net and we weren’t able to throw the ball down, whether that was them hitting over us–they jumped out of the gym–but we have to find some way to be aggressive at the net to get a touch and throw the ball down and then hopefully getting the ball back up. We were unsuccessful with that.”

The second game was much more competitive and Independence held a 21-20 lead at one point. The Red Riders scored the final two points of the match to take the 2-0 lead.

“Not finishing the match in game two was kind of the turning point,” Osysko said. “If we finished that match it would have been a different story for game three. We gave them too many opportunities putting the ball back. We weren’t as aggressive as we normally are. Defensively we kept the ball off the floor at times but they came out on top.”

With just three seniors graduating, Osysko hopes her players are hungry to return to regional next season.

“I would have liked to take them to the next step,” she said. “But, getting back down to where we need to be and not take a step back, hopefully this is fuelling the fire for next year to take that next step.”

Freshman Maura Collins led the team with 10 service points and Screptock and Collins tied for the team high in digs with 11. Junior Mallory Trombetta was second with 10.