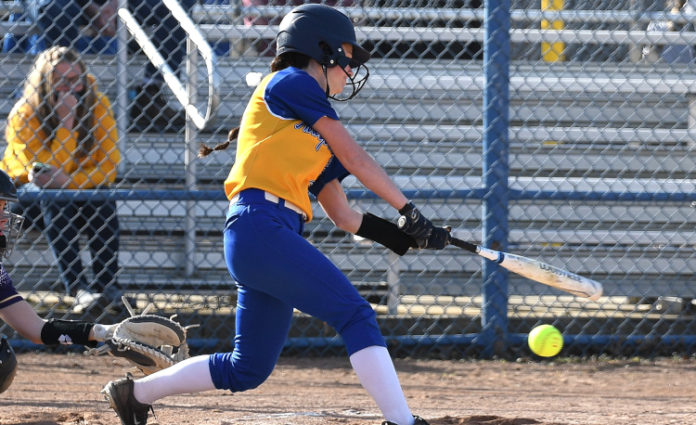 Alyssa Pallini hit the first two home runs of her career to lead Independence to an 8-4 win over visiting North Royalton Saturday.

With the win, the Blue Devils improved to 2-0 with impressive non-conference victories over Garfield and North Royalton.

The visitors took a 1-0 lead on a solo home run in the top of the third.

Independence quickly responded with a three-spot in the bottom half of the inning.

Tiffany Niro hit a one-out single and Sophie George followed with a base hit. Pallini then hit the first of her two home runs to give the Blue Devils a 3-1 lead.

“After my first at bat, I was extremely disappointed,” Pallini said. “I used those feelings in my second at bat to fuel myself to hit the home run. Coach Mal (Kobak) and I have worked on outside pitches for a long time now, and that’s the one I chose. I saw it coming and knew I had to step to it and go get it. This home run was especially exciting to me as it was my first one ever. I knew there were two girls on base and my job was to bring them home, whatever it took. Being a more small-ball hitter rather than a power hitter, I would have never expected myself to hit a home run, so I was just as shocked as anyone else in the park.”

North Royalton tied the game with solo home runs in both the fourth and fifth innings.

“The first home run she hit it was like, ‘Oh my God,’ and when she hit the second one she was coming around the base and I saw her face and it was like she won the lottery,” Moore said. “She hit the ball really well twice.”

Pallini knew she had to deliver again for her teammates.

“The end of the game was nearing and we needed to manufacture more runs,” she said. “When I stepped up the plate, I knew again, I had to get the ball in play and score my teammate. I was very confident going into the box after having one home run and an understanding of the umpire’s strike zone. After hitting the second one, I felt like I was in a dream. Seeing Coach Moore’s and Coach Mal’s faces is something I will never forget. Meeting my teammates at home plate made me realize how grateful I am to be surrounded and supported by such an awesome group of girls. I will always cherish that moment.”

Independence added three insurance runs in the bottom of the sixth.

Ashleigh Porter opened the inning by earning a free pass via taking one for the team and Morgan Pascarella reached on an error. Cat Rieger hit into a fielder’s choice but Cayla Mazzola drew a walk to load the bases. Niro then reached on an error and George hit a two-run double.

Porter allowed one run in the seventh but pitched out of a jam to seal the win. She allowed four runs on seven hits and fanned seven.

She had plenty of help from her defense.

“Anna Weber made two catches at first base against the fence on foul ball catches that were unbelievable,” Moore said. “Natalie George at third base, her defense was unbelievable too.”

Pallini finished the day 2-for-3 with two home runs, a walk, and she knocked in five runs. Sophie George was 2-for-2 with two runs scored, a double, and a walk with two RBI. Weber and Niro both finished with one hit.

“This win was one of those games as a player and coach you will never forget,” Pallini said. “Previously, we played James A. Garfield and had walked away with a dominating win; however, we knew North Royalton was a solid team. Going into the game, we were prepared and confident. Coming off of the win from this past week, we were counting on our bats to show up today to keep us in the game. I think this win is even more exciting because the growth throughout our young team has been tremendous between the scrimmages and past two games. This game specifically showed that when we play our game and put what we practice into any game, we can battle against any team.”