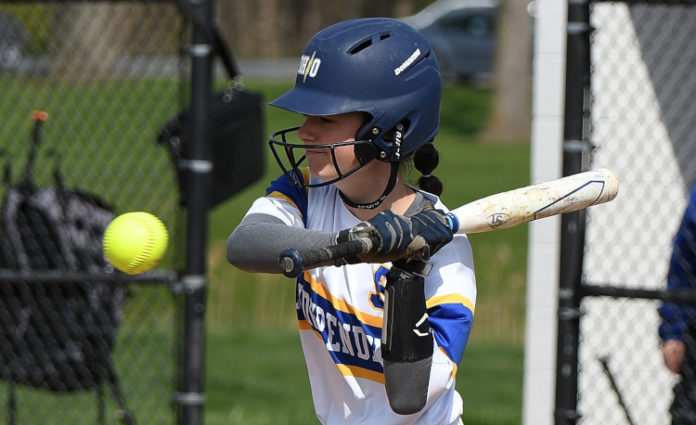 Independence shook off a sloppy start and cruised to a 9-2 win over visiting Chippewa in a Division III sectional semifinal on Thursday.

With the win, the Blue Devils advanced to play Northwestern in a district semifinal at Wellington High School on Tuesday.

“We didn’t play well on defense but we hit the heck out of the ball,” said Independence coach Garry Moore.

The Blue Devils committed three errors in the first inning, which led to two Chippewa runs.

Alyssa Pallini and Morgan Pascarella hit back-to-back singles to start the Independence half of the inning and Ashleigh Porter was hit by a pitch to load the bases.

Back-to-back strikeouts left the Blue Devils needing a clutch hit to climb back into the game.

“We had three errors in the first inning so it’s 2-0 and then we get the bases loaded and have a strikeout and another strikeout and couldn’t get a run,” Moore said.

Natalie George changed that when she singled home two runs and a third scored on an error.

George finished the game 3-for-3.

“We’ve been waiting for her to break out of her slump,” Moore said. “It’s not really a slump, but defensively, she’s killed it and today she had her best game offensively.”

With a 3-2 lead, Porter took charge in the circle and allowed just four hits in the final six innings of the game.

She didn’t allow an earned run and struck out seven in the game.

“She had command of her pitches and is just so solid on the mound,” Moore said.

“My mentality the entire season has been to get on base, whether that’s through a ball in play or a walk, that’s my goal,” she said. “From there on, I trust my teammates to move me around the bases so I can score. Today, I went up to the plate with the same mindset. I was relaxed, even with two strikes. The pitch was maybe a little inside, but other than that, right down the middle, so I kept my hands in to keep it in right field. At first, I wasn’t so sure it was over until Coach Mal (Kobak) screamed, ‘Goodbye,’ and then I knew. It was a very exciting moment for me and my team.”

Pallini finished the game 2-for-4 with four runs scored.

“Coming into today’s playoff game, I was a little anxious, but so excited,” Pallini said. “In my first at-bat, I had attempted to bunt and it just wasn’t working in my favor. With the home run, I had two strikes on me so I knew I had to protect the plate. The umpire had a bit of a bigger strike zone so I had a, ‘yes, yes, yes,’ mindset when the pitch came. During warmups, I felt super strong hitting and when the pitch came, I stepped right to it. It felt so good and even better to do it in a playoff game, and also my last game at Elmwood Park ever. It was bittersweet.”

“Alyssa Pallini hit the home run and made a really good defensive play at second base. She’s so consistent for us,” Moore said. “Morgan Pascarella did really well and knocked in a couple of runs.”

Pascarella finished her day 2-for-3 with a run scored and a sacrifice fly and Porter and Sophie George both finished with two of Independence’s 13 hits.

Blue Devils find their stroke in win over rival