Path to the Podium announced 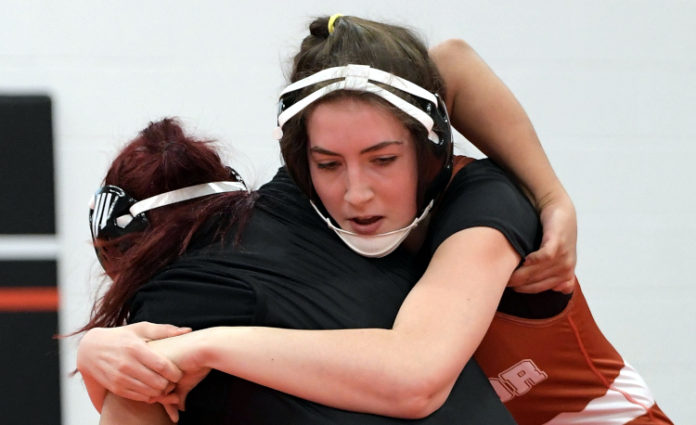 The Ohio Wrestling Coaches Association on Monday released the brackets for the 2021 Girls State Championships, which will take place at Hilliard Davidson High School on Saturday and Sunday.

Due to COVID regulations, weight classes 101-131 will be wrestled to completion on Saturday followed by 137-235 on Sunday.

Another COVID-related change to the tournament seeks to avoid the five-match per day rule by automatically placing the losers of the championship semifinals into the third-place match. Any wrestler who loses prior to the semifinals will drop into the consolation bracket with the chance to place fifth.

Below is a weight by weight breakdown of how area wrestlers were bracketed.

Harvey’s Melany Herrera placed second at the Northeast District tournament and will open the state meet against Taylor’s Isabella Savage. Herrera is ranked 15th in Ohio while Savage is No. 6. The winner of the Herrera-Savage bout could face defending 101-pound state champion, Hayley Snyder of Warren, the top-ranked wrestler in the weight class. Herrera’s half of the bracket also includes third-ranked Mikayla Young of Bellefontaine and 13th-ranked Emily Leesburg of Gahanna Lincoln. Young placed third at state last year.

Eastlake North’s Kailey Lesler-Harrold placed fourth at the district tournament and drew No. 8 Scotlyn Adams of Western Brown in the first round at state. Second-ranked Riley Banyas of Elyria, the Northeast District champion, fourth-ranked Cali Lang of Big Walnut, seventh-ranked Addison Rudolph of Central Crossing, and ninth-ranked Lily Bruggerman of Miami East also will compete in Lesler-Harrold’s half bracket. Banyas placed second at 101 last year while Lang was third at 106.

Mentor’s Campbell Splete, ranked No. 15, placed second at last week’s district tournament and will wrestle No. 10 Sarah Borton of Olentangy Orange in the first round at state. The winner likely will face defending state champion and the top-ranked 111-pounder in the state, Olivia Shore of Miami East. No. 5 Jada Shafer of Minerva, No. 6 Rita Carey of Brookville, No. 7 Alexa Donahue of Bethel Tate, who placed fifth at 101 last winter, No. 11 Emma Rinehart, and No. 14 Molly Wells of Delaware Hayes also will compete at this weight class.

Lutheran West’s Larissa Krantz finished fourth at the district tournament. She’ll open up her state tournament against No. 11 Rinehart. The winner advances to face the winner of the bout between Carey and Kesley Lasch of Collins Western Reserve.

Madison’s Lexi Zehe, ranked No. 4, placed second at the district tournament and will face Greenon’s Caitlin Retier in the first round at state. Zehe placed sixth at 121 last season. A pair of ranked wrestlers awaits the winner as Upper Arlington’s Isabella DiBenedetto, ranked fifth, will wrestle Colerain’s Bailey Brewer, ranked 15th, in the other pod in the bracket. DiBenedetto placed third at this weight class last season. Grace Jones of London, the defending state champion and top-ranked wrestler at 116, Catie Kerr of Lutheran West, ranked No. 9, and No. 14 Cerenity Bergeron of Taylor also are in this half of the bracket. Kerr drew the defending champ Jones in the first round.

Lutheran West’s Nevaeh Yarber, ranked No. 14, placed third at the district tournament and will open the state tournament against No. 8 Kendra Hiett of Lakota West, who finished as the state runner-up at 121 pounds last season. That half of the bracket also includes No. 4 Carmela Castaneda of Defiance, No. 7 Lilly Kinsel of Harrison, No. 9 Michaela Jackson of Minerva, and No. 11 Jaycie Spires of Amanda Clearcreek. Castaneda placed second at 126 last year while Jackson placed fifth at 121.

In a loaded weight class, the bottom half of the bracket includes the following ranked wrestlers: No. 1 Mallory Chunat of Alliance, No. 2 Rylee Gust of Springboro, No. 3 Alexus Shaneyfelt of Liberty Center, No. 5 Melania Szawranskyj of Westerville North, No. 6 Kelsey Dew of Delaware, No. 10 Zoe Gaetjens of Mogadore, No. 12 Mia Oribello of Marysville, and No. 13 Paige Foster of Mason. Chunat placed third at 131 last season, Gust was fourth at 116, and Dew placed third at 121.

Geneva’s Heidi Stamper placed fourth at the district tournament and drew top-seeded Cassia Zammit of Miamisburg, the No. 1 ranked wrestler at 131 pounds, who placed second in this weight class a year ago. The winner advances to wrestle the winner of the match between 10th-ranked Kayden Lewis of Rossford and No. 11 Hailey Amador of Hilliard Bradley. No. 7 Emily Segner of Marysville, No. 8 Katie Vogt-Shields of Medina Buckeye, and No. 12 Aubrey Griner of Delaware Hayes also appear in the upper half of the bracket.

Lakeside’s Adrianna Hutson, who placed third at districts enters the tournament as the second-ranked wrestler at this weight class. After placing fourth at 131 last season, Hutson opens her second state tournament against No. 5 Elisa Reese of Western Brown in the first round. The winner advances to wrestle the winner between No. 9 Macey Carroll of Olentangy Orange and Kaitlyn Ketcham of Ayersville. No. 3 Natalie Blair of Miami East and No. 4 Sarah Tapp of Wooster also will compete in the bottom half of the bracket.

North’s Breonna Preston and Lutheran West’s Alyssa Pirro both landed in the bottom half of the 137-pound bracket.

Pirro is the defending state champion at 143 and is ranked No. 1 at 137. She’ll wrestle Lauren Sloboda of Marysville. A win sets up a match with the winner of the bout between No. 11 Alicia Coleman of Olentangy Orange and Emma Schatzel of Mason.

Preston drew No. 2 Kloe Wulff of Napoleon in the first round with the winner advancing to face the winner of the match between No. 4 Lacie Reese of Western Brown and Kylee Tait of Warren. Reese placed third at 137 last season.

The upper half of the bracket includes No. 3 Meghan Werbrich of Taylor, No. 5 Rebekah Oladokun of Columbus DeSales, who was sixth at 143 last year, No. 7 Makenna Helmke of Tinora, who placed fifth at 131 a year ago, No. 9 Haley Winans of Marysville, and No. 10 Mia Gaetjens of Mogadore.

Lutheran West’s Jaeyla Reyes landed in the upper half of the 143-pound bracket. She’ll wrestle No. 5 Lilly Graham of Bishop Watterson in the first round. No. 2 Lizbeth Banderas of Norwood, who placed fourth at 126 last season, No. 3 Lila Mencer of River Valley, and No. 8 Katie Palmer of Marysville also will compete in this half of the bracket.

Brush’s Ernestine Underwood, ranked No. 12, and Mentor’s Brianna O’Brien will compete in the bottom half of the bracket.

Underwood drew Shanendoah’s Laney Hitchens in the first round while O’Brien will face No. 6 Maxina Wood of New Lexington.

Rossford’s Zoe Hussar, ranked No. 1 in the state, also will compete in the bottom half of the bracket, as will No. 4 Kyleigh Kirby of Miami East, and No. 10 Marissa Meyer of Fairfield. Hussar placed second at 143 last year.

Novak’s first-round opponent in the upper half of the bracket is Erin Martin of Walnut Hills. The winner advances to wrestle the winner of the bout between Marysville’s Sophia Smegal, ranked seventh in the state, and Megan Keller of Delaware Hayes. No. 3 Jayda Patrick of Alliance, No. 4 Noel Frye of Olentangy Orange, and No. 8 Sallie Wesselman of Bethel Tate also will compete in the upper half of the bracket. Frye placed fourth at 160 last season.

Cortez and Marich will open up in the bottom half of the 150-pound bracket.

Cortez, a district runner-up, drew Clermont Northeastern’s Jesse Foebar. Marich will wrestle No. 2 Sol Franco of New Lexington, the returning state runner-up at 160 pounds. The winners of these two bouts will face each other in the quarterfinals.

Top-ranked Erin Hamby of Miami East and No. 6 Aiyana Tolliver of Waverly also appear in the lower half of the bracket. Hamby placed third at 170 last year.

District champion Alayna Lopez of Lutheran West will wrestle her first postseason match at state as she drew a bye to the Northeast District championship at 160 pounds on Sunday. Lopez, who finished third at 150 last year and is ranked fourth in the state, will open her second state tournament against Alleana Brown of Logan.

No. 5 Mercedes Motton of Bishop Watterson and No. 8 Nya Miller of Ridgedale also appear in the bottom half of the bracket with Lopez. Miller placed fourth at 150 last season.

Lutheran West’s Amy Zell and Mentor’s Maddie Menchaca both landed in the bottom half of the 170-pound bracket.

Zell will open the tournament against defending 137-pound state champion and top-ranked Taryn Martin of Olentangy Orange. Menchaca will face No. 9 Savannah Reed of Madison Plains.

No. 4 Abi Miller of Western Brown also appears in the bottom half of the bracket.

The upper half of the bracket includes five state-ranked wrestlers in No. 2 Bailey Hackett of Brookfield, the Northeast District champion, No. 5 Kaylee Griffith of Miami East, No. 6 Carmen Pape of Delaware Hayes, No. 7 Gracian Daugherty of Ridgedale, and No. 8 Aiden Peoples of Waverly. Hackett finished second at 170 last season.

Brush’s Marneice Johnson, ranked No. 9 at 235 pounds, landed in the top half of the 189-pound bracket where she’ll wrestle No. 3 Cheyenne Meade of Troy in the first round.

Defending 170-pound state champion Ellie Harlow of Greenview, the top-ranked 189-pounder, also appears in the top half of the bracket along with No. 5 Kayley Ross of Alliance, No. 6 Annika Paton of Miami East, and No. 8 Talia Mitchell of Olentangy Orange. Ross placed fifth at 189 last season.

The bottom half of the 189-pound bracket features No. 2 Payton Curley of Dover, No. 7 Emma Hilliard of Minerva, No. 9 Gabrielle Chandler of Harrison, No. 11 Melissa Foster of Columbus Briggs, and No. 13 Savannah Isaac of Toldeo Whitmer. Curley placed second at this weight class last year.

Madison’s Maddie Moretti drew Marysville’s Heily Ramos-Velez in the first round of the bottom half of the 235-pound bracket.

That half-bracket also includes No. 2 Madeleine Wadesisi of Cleveland Central Catholic, No. 3 Karlie Harlow of Greenview, No. 5 Ella Clum of Lancaster, No. 8 Rylee Kirkwood of Harrison, and No. 10 Ashley Santana-Sanchez of Columbus East. Wadesisis placed second last season while Harlow placed fourth at 189, and Clum was fifth at 235.

The upper half of the bracket includes top-ranked Alaina Jackson of Minerva, the defending state champion, No. 4 Celina Nickell of West Union, No. 6 Jessica Edwards of Harrison, No. 7 Sydney Preston of Miami East, and No. 12 Jackie Hernandez of Delaware Hayes. Preston placed sixth last season. 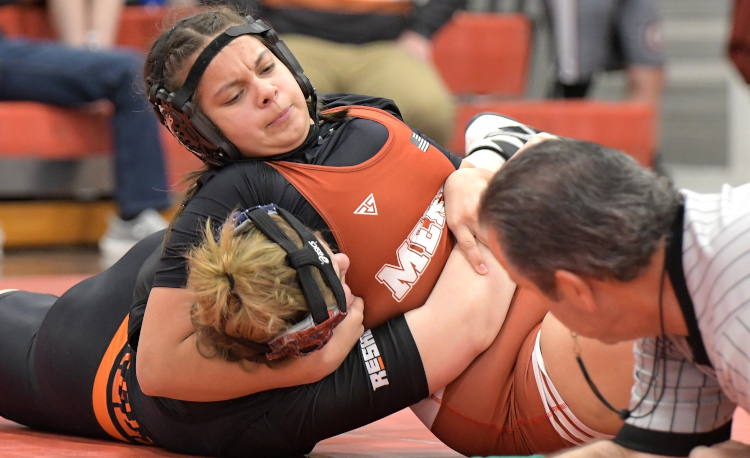