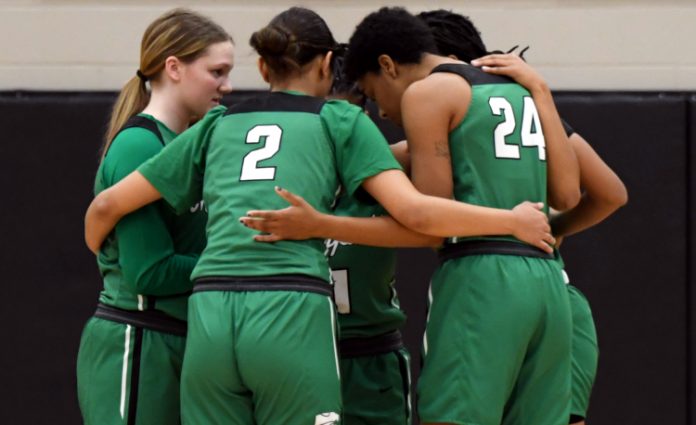 Euclid got off to a hot start but Mayfield didn’t panic and went on to beat the host Panthers, 58-47.

The Panthers drained six 3-pointers in the first quarter in building a 22-14 lead but the Wildcats remained patient and went on to outscore Euclid the rest of the way, 44-25.

“They couldn’t miss,” said Mayfield coach Cullen Harris of the Panthers in the first quarter. “I just kept telling the girls to keep contesting and they’ll find their level. They hadn’t made six 3s in a game all year so we just had to stick to the game plan and contest jumpers. They started missing and we started getting defensive rebounds and pushing the ball. I have to give the girls credit for sticking to what our plan was and not panicking and not freaking out. Basketball is a game of runs and they made their run early and then we made our run for the next three quarters.”

Mayfield responded to Euclid’s big first quarter with a 16-4 run in the second, which sent them into the locker room leading, 30-26.

“Euclid did a good job knocking down those shots, so we just had to adjust a little in our defense and stick with it,” said Mayfield’s Uriah Jennings, who led the Wildcats with 22 points. “It was very exciting, especially coming from a tough loss against Chardon. It feels good to come back with a win.”

Jennings and the Wildcats shook off the first quarter and remained patient in their approach on offense and increased their pressure on defense.

“We all did a great job staying disciplined and we all shared the ball,” Jennings said. “It was a collective effort.”

“Obviously, anytime you step on the floor you want to put your best foot forward and come away with the ‘W,’” Harris said. “Even though last Wednesday didn’t go the way we wanted, we played well and we did a lot of good things. They just did a few more good things than we did but we’re building and we’re growing. I think every time we take the floor we’re getting better than the time before. That’s what’s really important this time of year. We’ve got 10 games left in the next three and a half weeks, so hopefully, we’re hitting our stride.”

Heights is young and hungry