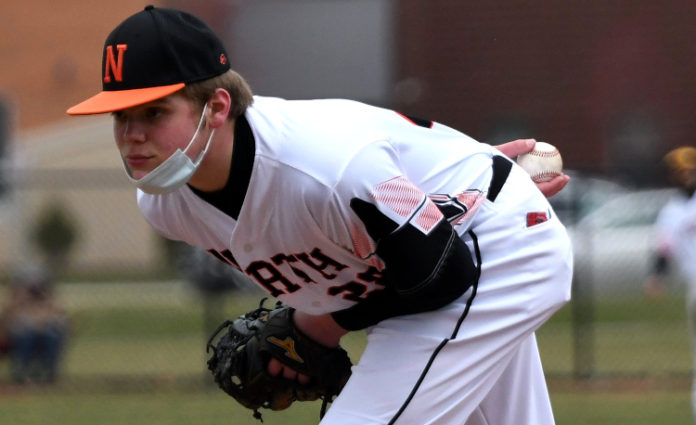 Sean Pecsi’s three-run single in the fourth inning sparked North in a 5-1 win at Lake Catholic on Monday.

The win, which pushed North’s record to 15-10 on the year, was the Rangers’ first since May 5. North had lost three straight and had several games postponed due to weather.

“It was really nice to just get out there and play baseball with no worries of rain or cold weather,” Pesci said.

A pair of errors and a single led to a Lake Catholic run in the bottom of the second but North took control of the game with its four-run fourth inning.

Joey Skolny singled to start the rally and Matt Barner was hit by a pitch to put runners at first and second. Trent Bucy singled to load the bases and Devo Britsky earned an RBI when he drew a bases-loaded walk to tie the game.

The Cougars recorded a pair of outs prior to Pesci stepping into the batter’s box.

“(Stringing hits together) was a necessity because we are a team that excels when we have momentum,” Pesci said. “With that at-bat, my goal was to get on any way possible and at least come up with one run. I couldn’t leave those runners out there.”

Pesci hit the first pitch he saw into right field.

The Rangers added an insurance run in the seventh when John Lanning and Skolny hit back-to-back two-out singles and Barner reached on an error.

Skolny led the Rangers with two hits while Pecsi knocked in a team-high three runs.