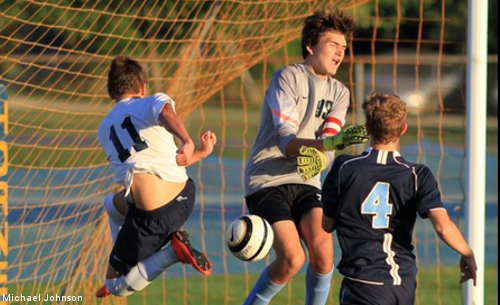 The sophomore, known by his family and friends as Pepo, scored three goals to lead Kirtland to a 4-2 win over visiting Benedictine on Thursday and now has found the back of the net 10 times in just seven games. He also has contributed with four assists this season.

“Pepo is very good with the ball,” said Kirtland coach John Valentic. “His skills are very solid, so when he gets those chances he finishes. He’s on a bit of a hot streak right now. He’s scoring almost two goals a game. He scores in bunches.”

His hat trick on Thursday helped the Hornets down a strong Benedictine team on a small field.

“Benedictine is very athletic; very quick,” Valentic said. “We played on the football field, which is 20 yards narrower than what we’re used to. That was a disadvantage for us. Those conditions, and the team, made it difficult for us. We fought for every goal.”

Pepo gave Kirtland a 1-0 lead when he took a pass from Sanjay Sundararajan and drilled it past the Bengals’ keeper.

“That was a cross from Sanjay,” Valentic said. “He took it off the back post and volleyed it home.”

Benedictine evened the score later in the first half.

Pepo struck twice early in the second half.

“He shot one off the back post and then scored off a corner kick,” Valentic said. “It was a rebound, a sloppy goal that Pepo put away.”

Kyle Work scored late in the second half to seal the victory for the Hornets, who improved to 5-2 overall.

Sundararajan recorded two assists in the game while Colin McGreal and Bartul Petric each had one. Keeper Danny Jahnke saved three shots for the Hornets.

Jared Ianiro didn’t show up in the box score but he certainly contributed to the scoring.

“The past couple of games and especially today, his distribution, ball winning and passing, has been decisive for us,” Valentic said. “It’s a huge part of our game.”