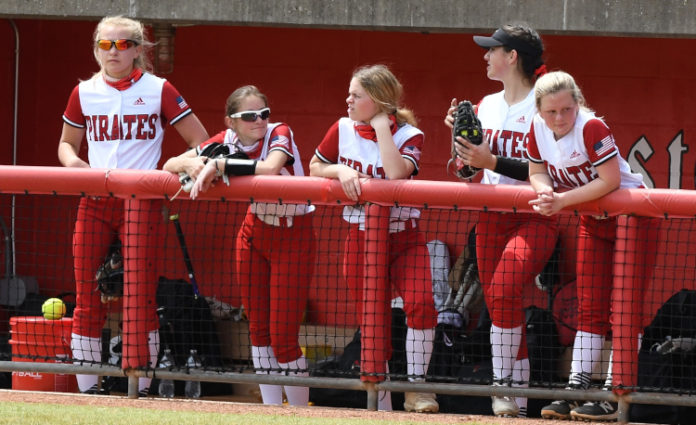 Perry closes out memorable season with win over Hawken

With the win, the Pirates closed out the year with a 19-9 record overall and a perfect 12-0 mark in Chagrin Valley Conference play.

After a 2-1 loss to West Branch in the playoffs on Thursday, the Pirates closed out the year on a positive note.

“It was great to go out with a big win after a tough loss against West Branch,” said junior Emma Pietrzak. “Going from no hits against a very talented pitcher to a few solid hits this game, I’m happy I could help the team out with our last win of the year.”

Pietrzak finished the game 2-for-2 with four runs batted in. Thompson was 3-for-5 and Elly Infalvi, Sydney Moon, and Lilly Agostine each collected two hits in the game.

The win was the 69th straight for the Pirates in league play and now with the season coming to an end, the torch officially has been passed from the Class of 2021 to the next group of seniors whose responsibility it will be to inspire their teammates to keep the streak alive.

“I have so much confidence in our underclassmen,” Pietrzak said. “In both this year’s freshmen and sophomore classes, there is loads of talent to keep our program alive and strong for years to come. That said, there are huge shoes to fill as we lose not only great players, but great leaders and friends as well. Sydney, Elle, and Emma (Webb) have taught us so much about the game of softball, from being vocal on the field to picking up our teammates in the dugout. I’m so grateful I had the opportunity to play and learn alongside them.”

Perry’s season ended in the first round of the playoffs, a rare occurrence indeed, but the Pirates have much to celebrate.

They won their fifth conference title and also handed head coach Joe Medlen the 100th win of his career.

“Getting to 100 wins is special as the players from the past and present have worked extremely hard and are rewarded by such a feat,” Medlen said. “I give all credit to my coaches from the past and present, along with all the awesome kids that have come through the program through these 100 wins. This accomplishment has been special having my son now by my side in this journey as we both love and have a passion for the game and doing all we can to help the players. Coach (Chuck) Mettler has been an unbelievable asset to our program also as he has been by my side since day one and is the ‘good guy’ in the dugout. I’m very blessed to have the opportunity to coach such great kids and work with great families.”

This season also saw Infalvi and Moon knock out the 100th hits of their careers and Moon became just the third Pirate in school history to earn All-Ohio honors.

“Sydney Moon had an incredible year after coming back from her ACL injury and took full advantage of the opportunity,” Medlen said. “Sydney has shown the girls and has passed on her passion for the game. Syd rarely allowed the game to get to her this season and was truly stronger than ever mentally. Syd has set records that will help the younger girls work harder than ever to achieve. Her leadership will be missed.”

“The season ended way before I thought it was going to but it means a lot to me to end my career as an All-Ohioan because it shows all the effort I put in throughout the years has helped me become the player I am today,” Moon said.

Moon learned a lot watching LaBoe play and she hopes to inspire future Pirates the same way she followed in LaBoe’s footsteps.

“As I watched her play she taught me to just play my game and not get in my head when I make errors,” Moon said. “I hope that (future Pirates) learn from me that you should always work your hardest and good outcomes will come and also not to be so hard on yourself because it will affect you and your game.”