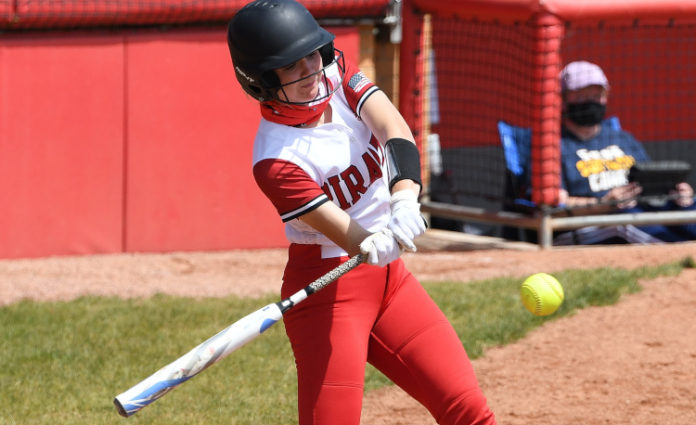 Perry took a giant step in winning its fifth straight conference championship with a 12-4 win at Edgewood on Wednesday.

With the victory, the Pirates improved to 14-7 overall and 9-0 in Chagrin Valley Conference play. Perry also extended its league winning streak to 64 straight games and completed its sweep of Lake Division opponents.

But, most importantly, the Pirates gained more experience and confidence heading into the postseason.

“The big thing I’m excited to see is we decided to go ahead and set our lineup and it is what it is,” said Perry coach Joe Medlen. “I told the girls, the biggest thing for us to have success the next couple of weeks going into the playoffs is everybody has to accept their roles. It has to be that way.”

Medlen has tinkered with his lineup throughout the season and now, during this four-game winning streak, he’s confident he found the best combination to set the Pirates up for success.

“We’re using a DP/Flex and the girls actually have bought into it and are settling in,” he said. “I told them after the game, you can see it working. We’re starting to jump on teams and not get jumped on. We’re starting to play our game from the start and we don’t have to come back. Defensively, we’re settling down. The defense has looked tremendous.”

While Medlen is thrilled with the play of his defense, it’s the Perry offense that took center stage on Wednesday.

Led by Sydney Moon and Gigi Vicini, the Pirates collected 16 hits against Edgewood.

Moon was 3-for-3 with three triples.

“All I was trying to do was put the ball in play,” Moon said. “The hits ended up being farther than I thought, which helped me get around the bases. Today, I saw the pitches out of the pitcher’s hand very well and it helped me hit where I wanted it to go.”

Vicini also hit a triple in finishing 4-for-4.

The Pirates led 4-1 before Edgewood rallied for two runs in the bottom of the fifth. Perry responded to that rally with one of their own and when the top of the sixth inning ended, the Pirates had tacked on eight more runs.

Emma Pietrzak and Vicini both singled to start the rally. Rileigh Liddy then hit a one-out single to load the bases. Pietrzak scored on an Elle Infalvi groundout and then Calli Thompson singled home two runs. Moon followed with a bases-clearing triple and she scored on Lilly Agostine’s single. Faith Hartman singled and Agostine scored when Pietrzak reached on a dropped third strike. Vicini’s triple cleared the bases and also closed out the Perry scoring.

Edgewood added a run in the bottom of the seventh but Hartman limited the damage and closed out the win. She allowed just one earned run on five hits and struck out three.