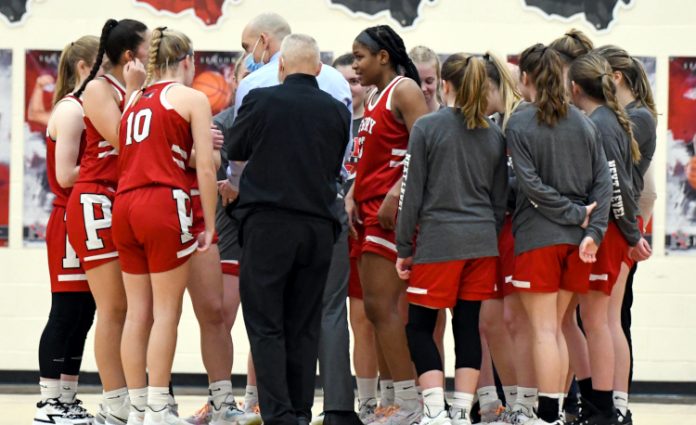 Perry’s offense got off to a slow start but the Pirates amped up the pressure on defense in a 39-21 win over visiting Lake Catholic in a Division II sectional final on Saturday.

The Pirates outscored the Cougars in the second quarter, 14-2.

“We knew coming in that they had been playing really well,” said Perry coach Roy Infalvi, Jr. of the Cougars. “I think they won five of their last six or so and won some good games, so we knew that there they were going to come in and fight. We kind of didn’t get off to a great start in the first five or six minutes but I thought we picked it up after that and changed up some things defensively.”

JaC’ana Anderson scored all 10 of Perry’s first-quarter points on her way to a game-high 21.

The Pirates had more balance in the second quarter as Marcela Rodriguez drained a big 3-pointer and scored six points to help Perry extend its lead. Grace McKoon and Izzy McKoon both scored their points in the frame and Sophia Makad added two of her four points during the run.

But, it was Perry’s defense that set up its offense in the second quarter.

“We changed some things up defensively and gave them some troubles and we got some transition points,” Infalvi said. “Things started going better from there.”

The Pirates also focused on guarding the Cougars on the perimeter and allowed just one 3-pointer in the game.

“They made seven threes the other day, so we knew that was a big issue,” Infalvi said. “We had to keep them off the 3-point line and not given second chance opportunities and I thought we did a good job of that.”

With Anderson dominating in the paint, the Pirates were able to control the inside game.

“She did a lot of stuff in the paint,” Infalvi said of Anderson. “She did a good job of driving to get in there and score and pulled down some offensive rebounds. She did get a couple of steals that led to breakaways in the full court. She’s been doing a great job on both ends coming down the stretch and she stepped up in a big way and that’s what good players do.”

With the win, Perry set up a rematch with West Geauga in the district semifinals on Wednesday at Lakeside.

While the Pirates are eager for revenge, Infalvi is confident his players will focus on playing their own game.

“I know the girls are eager to play and have a second chance to get after West G,” Infalvi said. “We’ve preached all year, and I think they’ve done a good job of it, that we can’t get too high when things are going good and too low when things are going bad. We have to play our game and keep an even temperament. We have really focused on what we want to accomplish and I think they’re on a mission. I think the girls are going to be ready and I’m looking forward to it, it should be a great game.”