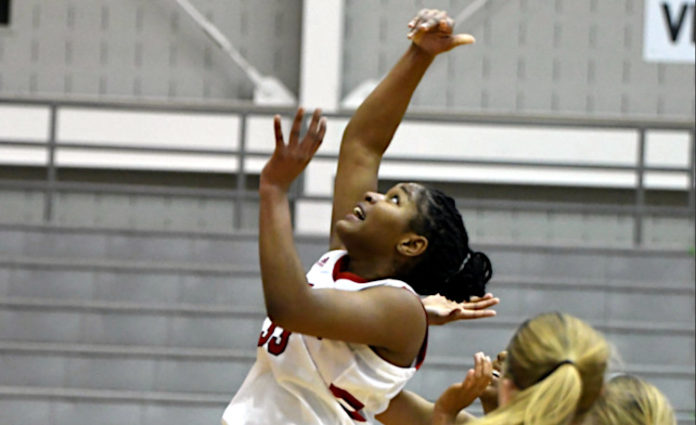 A week ago, Perry couldn’t hold a double-digit lead in a loss at Archbishop Hoban.

The Pirates learned a lot from that game against the Knights and on Wednesday, the team held off a talented St. Vincent-St. Mary squad, 43-39.

“I’m really proud of our team and how we played toward the end of the game,” said Perry coach Roy Infalvi, Jr. “After last week, we ended up letting one slip away, we held our composure down the stretch, made some foul shots when they counted, and broke the press when we needed to. It felt really good. St. V’s is a big-time program and we lost to them in the regionals two years ago, so we had this one marked on our schedule and we came through with a great win for us.”

SVSM got off to a hot start as Dream Cherry, who finished with 18 points, drained a pair of early 3-pointers to help the Irish take a 14-13 lead after the first quarter.

Perry’s defense settled in and limited the Irish to just two second-quarter points as the Pirates took a 22-16 lead into the break.

The Irish pulled to within 27-26 with 25 seconds left but Madyson Hacking added a layup and converted on three free throw tries after being fouled on a shot as time expired in the half.

SVSM cut its deficit to 32-27 heading into the fourth quarter but the Pirates maintained their defensive effort throughout the final eight minutes to hold on for the win.

Hacking, who finished with a game-high 20 points, and Elle Infalvi, who scored 14, led the Pirates on offense but beating the talented Irish required a team effort.

“We have a lot of unsung heroes,” Coach Infalvi said. “Margaux (Jean) continues to do a great job defensively and at the point. JaC’ana (Anderson), both Tuesday and today, she played great defensively. She did a great job moving her feet. Marcela (Rodriguez) is super scrappy and gets those loose balls and rebounds. It really is a total team effort. Even though a couple of girls score more than the others, it takes all of us to win and everyone is doing good things. Izzy McKoon scored one point against North Royalton (on Tuesday) and two today but she’s all over the floor. She plays a lot like Marcela does. They go under the radar but they definitely are playing well.”

Anderson finished with five points but her contribution on the defensive end of the court was far more important as she challenged SVSM’s bigs and made them earn their points.

“Going out every night, I know my matchups and I know what I have to do for my team for defense and offensive rebounds,” she said. “Even if we’re undersized, I still know I can get up there with anyone.”

Infalvi scored nine of her 14 points from the free throw line with six of those freebies coming in the final quarter. She also drew a charge with 1:15 remaining in the game.

Hacking went 2-for-2 from the line in the fourth.

“We count on both of them in crunch time,” Coach Infalvi said. “Elle wasn’t shooting the ball great from the outside. She had a couple of looks she missed that she normally makes but down the stretch she made her foul shots and was 9-for-11 at the line. Madyson made some nice plays offensively but I wouldn’t say it was totally clicking for her offensively either, but she came through and made 6-of-7 at the line. When the game is on the line, both of them step up and do little things that make a difference.”

Perry’s defense held an opponent to 40 points or less for the fifth time this season. The Pirates are 5-0 in those games.

“I give all the credit to them,” Coach Infalvi said of his players. “They work every single day in practice. We work on defensive drills and defensive situations and they work at it. I think over the past couple of years, they have bought into the fact that if we practice hard and do the little things then it shows up in the games. They knew they practice hard and they stay motivated to play defense. They’ve seen what it can do.”

With the win, Perry flips the New Year with an 8-1 record but the Pirates aren’t satisfied.

“Going into this year’s season, we knew we had a target on our backs,” Anderson said. “We lost a few players from last season but overall I think that the mindset as a whole going into every game is to control the boards and make good offensive plays and that’s what we’ve been doing and moving forward into the second half of the season, we’ll continue to do that.”