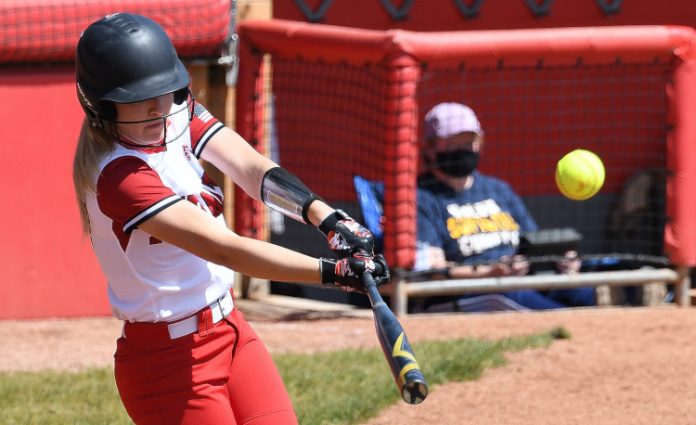 Perry closed out its spring break trip on Thursday with a doubleheader split at The Ripken Experience in Pigeon Forge, Tenn.

The Pirates opened the day with a 5-3 win over Waynesburg Central High School out of Pennsylvania and then the Pirates dropped a 7-4 decision to Westerville North to close out the day.

“It’s been crucial for us to play this great competition so early on in the season,” said Perry coach Joe Medlen. “Our girls were able to face adversity right away and came together in many ways on and off the field. We learned a lot about ourselves this week; so many positives to bring back to Ohio.”

Madeline Infalvi continued to shine as she was 3-for-4 with two runs scored against Waynesburg. Lilly Agostine pounded out two hits including a home runs and she knocked in three runs. Calli Thompson, Gigi Vicini, and Faith Hartman also had hits against Waynesburg.

Hartman picked up the pitching victory after allowing three earned runs on six hits and she struck out 10.

Infalvi led the way again in the loss to Waynesburg Central.

She was 2-for-3 with two runs scored and two RBI. She also hit her first career home run. Rosalyn Tharp, Vicini, and Mia Ward also recorded hits for the Pirates.

Ward took the loss in the circle. She allowed seven earned runs on 14 hits and struck out five.

“Both Faith and Mia were bulldogs this weekend,” Medlen said of his pitchers. “They were getting ahead early in counts and attacking the strike zone knowing they have great teammates behind them. It was great to see us play some clean ball so early in the season with such a young team.”

Perry’s offense has scored 27 runs during their spring trip and the hitters are doing what’s necessary to adjust to the different pitchers they have seen.

“We’ve worked so hard in the offseason and it’s really to no surprise the girls have been able to make adjustments quickly,” Medlen said. “We tell them to take what the pitcher is giving us and they lived on the outside corner, so we promptly smashed hits to the opposite field.”

The Pirates return to Ohio with a 2-4 record but with plenty of game experience under their belts and the confidence to open to the Chagrin Valley Conference schedule against Lakeside on Monday.