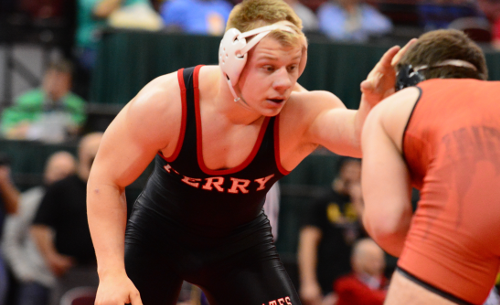 It also was the decisive factor in Kremiller being named the 2015 OhioVarsity.com Wrestler of the Year.

Kremiller scored the winning escape in sudden victory overtime to defeat Lexington senior Bailey Faust, 3-2, to win the Division II, 195 pound championship. He finished the season with a 46-3 record and a second state placement after finishing fourth at 182 last year.

Kirtland head coach Scott Francis was named Coach of the Year after leading the Hornets to a 20-7 dual record and the Region 19 championship. By winning the regional title the Hornets earned a spot in the OHSAA state team duals tournament in Columbus.

113 Harry Feuer, Junior, Mayfield
Feuer’s second trip to the state tournament ended with the 113-pounder a few steps higher up on the podium. He finished eighth as a sophomore and last weekend he went 4-2 to finish fifth. Feuer finished second to Elyria’s Brendon Fenton at the Northeast Ohio Conference tournament but beat Fenton in the state consolation quarterfinals. Feuer finished 39-6 on the year.

120 Louis Demarco, Senior, Hawken
A two-time state placewinner, DeMarco finished eighth in 2014 and seventh in 2015. DeMarco, who finished the year at 43-4, finished second at the Garfield Heights District then avenged that loss with a 6-3 win over Smithville’s Riley Smucker in the match that guaranteed his All-Ohio honors.

126 Trey Combs, Sophomore, Cuyahoga Heights
In what was sure to be the first of several trips to the state tournament, Combs finished 1-2 at 126 pounds to close out the year with a 33-12 record. He came up one win away from All-Ohio honors.

132 Antonio Mitchell, Senior, South
Mitchell battled through injuries to finish second at the Mentor District to earn his first state tournament berth. He finished 0-2 in Columbus and 42-6 on the year with a PAC title to his credit.

138 Evan Francis, Senior, Kirtland
Francis returned to the state tournament for the third consecutive season but once again he ran into one of the deepest weight classes in Columbus. He opened the tournament against eventual Division III 138 pound champion David Carr of Dayton Christian then dropped a 4-2 decision to three-time state placer Wes Fritz of Norwalk St. Paul. Francis closed out the season with a 41-10 record.

152 Nick Sbrocco, Senior, Perry
Sbrocco closed out his senior season with two losses at the state tournament to finish 34-13 on the year. He was fourth at the Alliance District tournament and won the CVC title.

160 Clayton Davidson, Senior, Kirtland
Davidson entered his second consecutive state tournament with a perfect 45-0 record. He opened the event with a 3-2 loss to Tontongany Otsego’s Riley Tercha then rallied for four straight wins before losing to the projected state champion in the third place match. Davidson knocked off Tercha, 4-1, in the consolation semifinals and finished the year with a 49-2 record.

170 Robert Sicker, Senior, Harvey
Sicker turned in a memorable season for the Red Raiders. He collected over 40 wins—after finishing 22-15 as a junior—then became the first Harvey wrestler to win a CVC title. Sicker’s season came to an end in the consolation quarterfinals of the Alliance District.

182 John Szep, Junior, Lake Catholic
Szep finished the year with a 33-8 record and an appearance in the Division II state tournament. He went 1-2 in Columbus with both losses coming in sudden victory overtime.

195 Kyle Kremiller, Senior, Perry
The future Rutgers Scarlet Knight achieved a lofty goal by winning the state title while also inspiring other wrestlers to follow his path. Kremiller began wrestling in seventh grade and finished his career as a four-time district qualifier and two-time state placewinner.

220 Brian McNamara, Senior, Aurora
The senior from Aurora kick started his postseason run with a CVC title then finished third at the Mentor District to punch his ticket to state. He went 0-2 in Columbus to finish off the year with a 37-7 record.

285 Brandon Truhn, Senior, Perry
Truhn finished his senior season with a 41-10 record and a sixth place finish at 285 pounds in the Division II state tournament. It was his first trip to Columbus after watching former Perry heavyweight Billy Miller win back-to-back state titles.