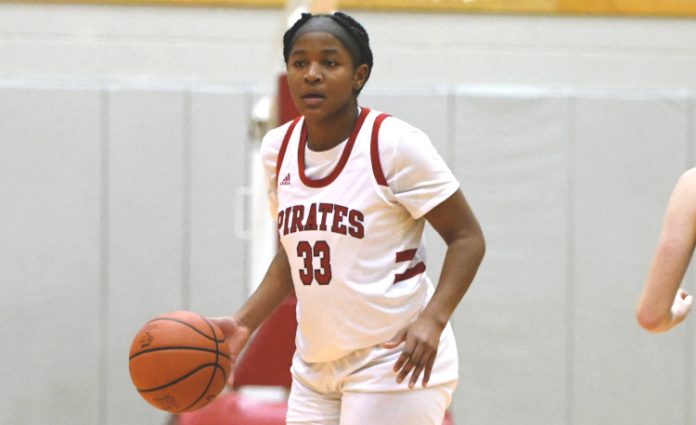 Playing back-to-back games in less than 24 hours didn’t slow down the Perry Pirates, who swept the weekend with wins over Orange and Chardon.

The Pirates beat visiting Orange on Friday night, 55-21, and then traveled to Chardon on Saturday afternoon and beat the Hilltoppers, 61-29.

“One of the things we really focused on the last couple of weeks was coming in Saturday morning and practicing after a Friday night game and really having that intensity and effort in preparation for these situations because we had a back-to-back game today and we have another one or two in January,” said Perry coach Roy Infalvi, Jr. “We knew we would have to come out and play good basketball today. I was proud of the way we responded. We came out with great effort and great intensity from the beginning and it held up for 32 minutes.”

Rylee Hodge scored four of her 13 and Marcela Rodriguez added three of her 10 in the first quarter as the Pirates took an early 14-10 lead.

Rodriguez added eight more in the second to push the lead to 25-18 at halftime.

“One of the things they’re really good at is defensively getting after the basketball and creating some chances for themselves,” Infalvi said of the Hilltoppers. “We were a little sloppy early on with our passing and we kind of settled down in the second quarter. We got into a little bit of foul trouble in the first quarter as well, but things settled down. We had a nice second quarter and a great third quarter.”

The Pirates held Chardon to just 11 points in the second half and sharpshooter Nicole Krakora was limited to just one field. She was 8-for-8 from the free throw line and led Chardon the Hilltoppers with 10 points.

“Defensively, I thought we played great for four quarters,” Infalvi said. “We did a good job of containing Noerr and not letting her get to the hoop and contesting her shots and on Krakora, their 3-point shooter, I felt we contested almost every one of her shots.”

JaC’ana Anderson, who led Perry with a game-high 17 points, took over in the second half.

She scored eight points in the third quarter and six in the fourth. Anderson was 6-for-6 from the free throw line and finished the game 7-of-8.

“One of our main keys was to take away middle penetration and play tough defense and not let anyone be comfortable when they have the ball in their hands,” Anderson said of her play in the paint. “It’s important that I go out every night and work on the things that I’ve been doing in the offseason and in-season to continue to help our team be successful during the season.”

Grace McKoon and Kaitlyn Newsome each contributed to the win with five points and Izzy McKoon, Maddie Stevenson, and Audrey Austin all scored three points. Gigi Vicini added two for the Pirates.

“It was different but it wasn’t tough,” Anderson said of the quick turnaround from Friday night’s game to Saturday’s. “We practice early on Saturday mornings, so we’re prepared to play in the afternoon even after a game the night before.”

Perry improved to 6-0 on the year.