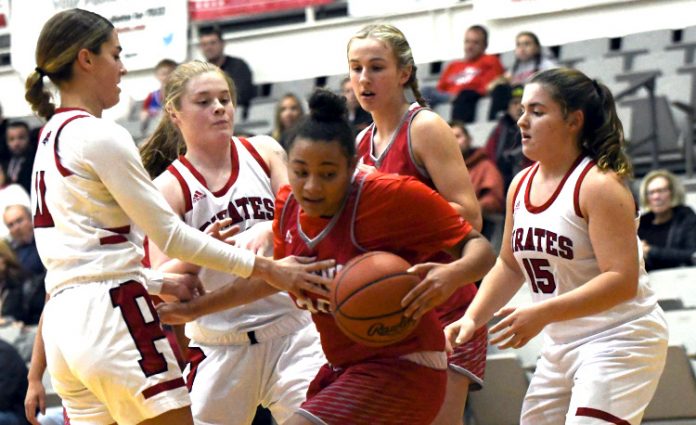 Perry rode its stingy defense to a 62-35 win over visiting Geneva in a Chagrin Valley Conference Lake Division showdown on Tuesday.

The Pirates used a 29-8 run that started midway through the first quarter to break open the game at halftime.

“I thought we did some good things early on even though we missed some shots,” said Perry coach Roy Infalvi. “We had a couple of possessions where we had a bunch of offensive rebounds and just put them away. I think a lot of the runs we go on and some of the other stuff we do is fueled by our defense and we created some turnovers in transition. That’s when we went on a little run there where we got some turnovers and finished it together. We struggled with that a little bit on Saturday, as well as some shooting in general and even making shots in transition, so it was good for us to get back on track with that.”

Perry and Geneva were tied 6-6 midway through the first when the Pirates amped up their pressure.

A 9-0 run gave the Pirates a 15-6 lead before the visiting Eagles put the ball in the basket and added a free throw to pull to within 15-9.

That’s as close as Geneva would get as the Pirates responded with another run that gave them a 35-14 lead at halftime.

Grace McKoon scored nine of her game-high 19 points in the first half to pace the Pirates.

She had plenty of help on the offensive end as Rosalyn Tharp also reached double digits with a 10-point night and Sophia Makad contributed with eight points, Victoria Lynch scored all seven of her points in the second quarter, Jaidyn Newsome and Kaitlyn Newsome both pitched in with five points, Izzy McKoon scored four, and Abby Bartlett and Audrey Austin each finished with two points.

“We have multiple people that I think could step up on any night,” Infalvi said of his team’s balanced scoring. “Sophia missed our game Friday night because she was sick, and she’s still not 100 percent yet, and Izzy missed a game last week because of an ankle injury, but we have a range of girls that can score for us. Then we have Victoria and Rosalyn, who are sophomores. Audrey is a sophomore, Abby’s a junior, and they all now have five varsity games so they’re still learning, but they all have the ability to do that on any given night. That’s a good problem to have.”

Even with Perry’s relative lack of varsity experience, the Pirates will remain competitive in any game where they play at that level on the defensive end.

“That’s really important to us,” Infalvi said of Perry’s defensive effort. “When we have good offensive nights it’s because we had a good defensive night. Our defensive propels us to get the ball up and down the court and gets us out into space. We really live on the defensive end. We don’t have a ton of depth, but we have enough where I feel everyone we have has the ability to do what we want to do on defense. They have quickness an good instincts, so I feel confident with anyone we put in there.”

Badgers rebuild with speed and depth

Perry runs away from Edgewood