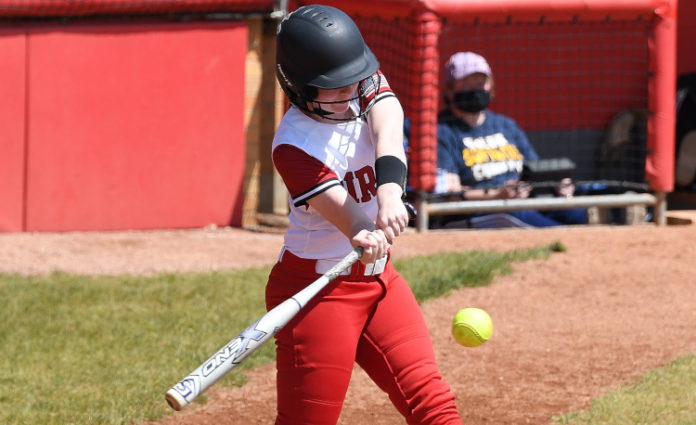 Sydney Moon’s first-inning home run gave the Perry Pirates a lead they wouldn’t relinquish in a 13-3 five-inning win over visiting West Geauga in a Division II sectional semifinal on Tuesday.

The three-run blast, the 12th four-bagger of her career, also set a new school record for home runs in a career. She was tied with Emalee Sines and Riley LaBoe with 11 homers.

“It means so much to me knowing that I have broken the home run record with all of the good hitters that went through Perry,” Moon said. “I watched a ball go by and then a strike. The second strike was the one I hit. It was right down the middle and kind of low, but it felt really good as it went off my bat.”

Moon’s home run was part of a six-run first inning that helped Perry erase a one-run deficit after West Geauga’s Shae Malone hit a solo shot in the top half of the inning.

The Wolverines entered the game hoping to pull off the postseason upset after a tough 9-6 loss to the Pirates on April 28.

Perry had other ideas.

“We jumped on them early,” said Perry coach Joe Medlen. “The girls came out hitting. It was incredible how they played and how they responded. With West G going up one with a home run, we hung a pitch and she hit it, but they came back and the girls responded. They didn’t even flinch. They knew we had to hit. It just started with Elle Infalvi’s double and then we had productive at-bats all the way through the lineup.”

Down 1-0 in the bottom of the first, Infalvi hit the second pitch she saw into left field and legged out a double. Calli Thompson then reached on an error and Moon air-mailed the ball over the fence in center for a 3-1 lead.

Emma Pietrzak then doubled and Lilly Agostine walked. Gigi Vicini hit an RBI single. The Wolverines turned a double play to minimize the damage but Rileigh Liddy hit an RBI single with two outs and scored on an error to push the Perry lead to 6-1.

Infalvi’s second double of the game led to a four-run second inning. Moon and Vicini singled in the inning, Pietrzak hit a sacrifice fly, and Faith Hartman hit a two-run double.

The Pirates added two more in the third on Thompson’s two-run homer.

“She hasn’t been hitting well and now all of a sudden, at the right time of the year, that’s what we need out of her,” Medlen said.

Frankee Flesher’s one-out double in the fifth pulled the Wolverines to within 12-2. She would later score on an error to cut Perry’s lead to 12-3.

Pietrzak hit an RBI single in the bottom half of the inning to invoke the run rule.

In addition to her record-setting home run, Moon pounded out three singles to finish the day 4-for-4 with two runs scored and she knocked in three more.

“I am approaching these at-bats as I have been the whole season,” Moon said. “I just want to produce for my team and be able to look back on my senior year and know I did it for my team.”

Infalvi, Pietrzak, and Vicini each closed out the day with two hits. Thompson, Pietrzak, Vicini, and Hartman each knocked in a pair of runs.

“They were very confident and they were not going to be denied,’ Medlen said. “We were a very different-looking team today and defensively, they were really, really sound. It all just came together today for some reason. It was a perfect day today. Our defense was good; our offense was good; the girls who pound the ball continued to pound the ball.”

Hartman went the distance in the circle. She allowed two earned runs on three hits and struck out three.

“She’s been working her tail off this year and she went out and did her thing,” Medlen said. “All year, she bends but never breaks. She’s constantly a workhorse for us. She shakes off these home runs like it’s nothing.”

Flesher, Malone, and Aliyah Joltin each had hits for the Wolverines.

PK the difference in West G’s win over Kirtland

Chardon runs to win at Riverside