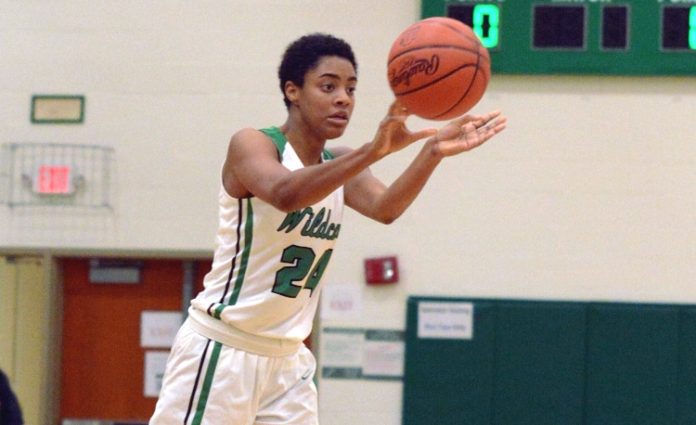 Hannah Peterson recorded her second straight double-double in leading Mayfield to a 32-30 non-conference win at Lake Catholic on Monday.

Peterson scored a game-high 16 points and pulled down 14 rebounds in the win.

“Tonight, we had an advantage with Hannah,” said Mayfield coach Ryan Looman. “She was all over the place. She got key rebounds and buckets when we needed them. Having her on the court gave us that presence of someone who was going to bring her teammates along with her to get the job done.”

The win snapped a two-game losing skid for the Wildcats, who improved to 2-5 on the year.

Mayfield held Perry to a season-low 39 points last Wednesday but only mustered 13 on the offensive end. The Wildcats then saw a late rally come up short in a 59-52 loss to Hathaway Brown on Saturday.

Against the Cougars, Mayfield played well for 32 minutes.

“I think it was really good for us, just the mindset of getting a win after taking some on the chin,” Looman said. “We had some opportunities to either win or be there at the end of the game and you’re fearful as a coach that you get into too much of a mindset that you’re going to do something to give it away or we just can’t get over the hump. To have a game where the kids had to battle for 32 minutes, and they really did, they had to fight their way to that victory.”

Lake Catholic led at halftime, 20-15, but Mayfield outscored the Cougars in the third quarter, 9-0, to take a 24-20 lead into the final quarter.

Peterson fueled that third-quarter run with her effort on both ends of the floor.

“She was altering shots on one end and getting rebounds,” Looman said. “She was playing such a great two-way game for us. It was awesome to see.”

Peterson scored 10 points with 11 rebounds on Saturday at Hathaway Brown and followed up that performance with career highs in points and rebounds.

“It felt really good to get a win,” she said. “After a couple of tough losses, this win really helped us create a good team dynamic and gives us confidence going into our game on Thursday.”

Peterson credited her teammates for setting up her career night.

“A lot of my points came from assists from my teammates,” she said. “They had some really good looks and great passes underneath the basket. My success tonight was definitely a team effort.”

Lake Catholic edged Mayfield in the fourth quarter, 10-8, but the Wildcats held on for the victory.

“I never felt throughout the course of the game that we were going to lose,” Looman said. “We had kids stepping up. With youth sometimes, there’s an uncertainty of how to handle the moment when it comes to you. As you get through more and more of those moments and you mature, you have an understanding of where you have to step up and take advantage.”

That’s exactly what Peterson has done over the last few days and she hopes to carry that momentum into the rest of the season.

“My confidence in myself has definitely increased over the last couple of games,” Peterson said. “Coach Looman has been stressing about going up strong against the defense in practice, so I translated that onto the court tonight. I’m going to keep my teammates in mind as we move forward in the season and continue to be the best player I can be on and off the court.”

Uriah Jennings contributed to the win with five points and 10 rebounds. Alex Duncan scored four points and Olivia Nicolli finished with three. Ashley Dearden and Gabby Moore each pitched in with two points.

Duncan also posted four assists and Peterson had two blocks on the night.