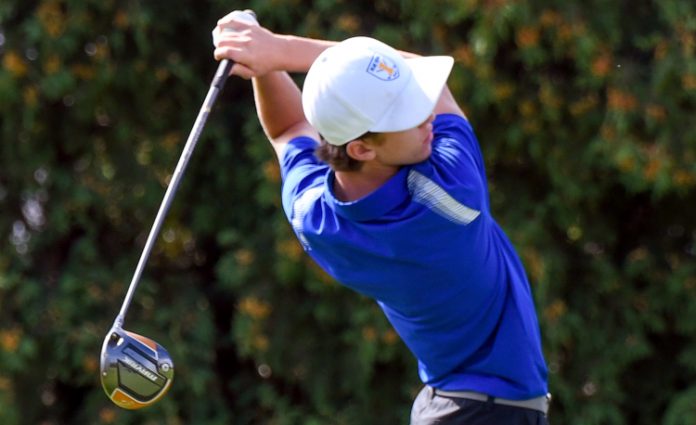 Independence’s Mark Pillar claimed medalist honors at the Division III Pine Hills Sectional Tournament on Wednesday, leading the Blue Devils to a second-place finish and a berth in next week’s district competition.

Gilmour Academy shot a 313 to win the sectional title. Independence finished with 329 strokes.

“I’m so happy for the guys,” said Independence coach Mike Marcinko. “You turn the page, it’s a second season, you’re competing, and it’s a different atmosphere. There’s a little more tension and there’s finality if it doesn’t go your way but I thought the guys rose to the occasion.”

Pillar shot an even-par 72 to win the tournament by three strokes over second-place B.K. Kwasniak of Cornerstone Christian Academy.

“I’m extremely excited,” Pillar said. “This is something the team and I have been working on all year. Coach Marcinko has been preparing us for this tournament. We did what we needed to do to advance.”

The postseason presents each golfer with additional pressure not faced during the regular season.

“There was a lot of good competition today,” Pillar said. “This pressure and competition helps me thrive and do my best.”

Pillar struggled off the tee box early in the round but countered with a strong command of his mid-range irons and short game.

“My driver was a bit off in the beginning, but my irons made up for my driver’s mistakes,” he said. “My irons left me close to the pin, which gave me great opportunities for birdies.”

Charlie DeCapua carded an 85 and Sam Coddington and A.J. Marcinko both shot 86 to close out the scoring. David Eichler also competed for the Blue Devils. He shot a 96.

“We had good scores from top to bottom and that’s what it takes,” Marcinko said. “It was a group effort. Charlie had a rough front nine but a better back nine. It was kind of flipped on Sam and A.J. It was kind of a tale of two nines. All three of them had a two or three-hole span where they blew up but got it back on the rails again. They did a great job of not letting the round get away from them. Even though they had a bad stretch, they refocused and put balls in play, got chips and putts, and got things going in a positive direction again.”

By finishing among the top three as a team, the Blue Devils advanced to next Thursday’s district tournament at Tannenhauf Golf Club in Alliance.

They’ll do so riding a lot of momentum after posting a season-low team score.

“We knew nobody was going to get Gilmour,” Marcinko said. “We knew everybody was fighting for the second and third slot. All year, we kept thinking in tournaments we wanted to shoot in the 340s and once we were in the 330s, so to throw up a 329 on a tough course like that and have the group play well really bodes well. It gives you a fighting chance at district but it just gets tougher.”

August 3, 2021
Independence returns plenty of talent from the team that finished fifth at state last season and the Blue Devils hope to make another run.

Dragons ready for next step