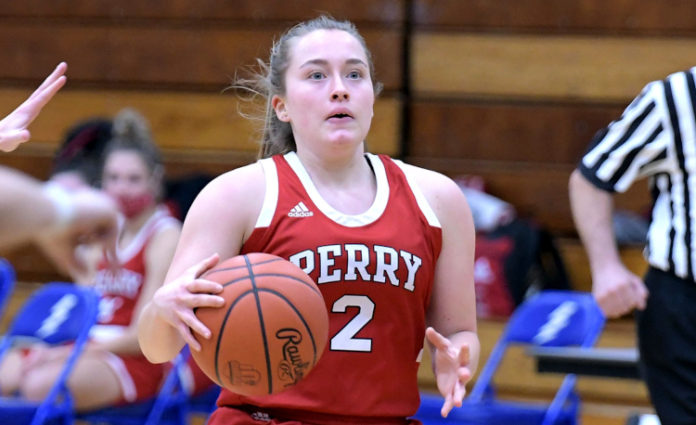 Pirates achieve first of many goals

With a 69-34 win at Geneva on Saturday, the Pirates closed out the conference portion of their schedule with an undefeated mark.

“We start every season with our initial goal to win the conference,” said Perry coach Roy Infalvi, Jr. “We’ve won our fifth consecutive CVC championship and each one is special. We don’t take it for granted. We did a great job of focusing on each and every game and the results were a testament to that.”

For the Pirates, winning the league title was important but so too was bouncing back from just their second loss of the season.

Chardon beat Perry on Monday and the game against Geneva gave the Pirates the opportunity to regroup and refocus on their goals.

Infalvi, who scored a game-high 16 points in the win, also didn’t want Perry’s streak of CVC title wins to fall on her watch.

“As a senior, it is important to keep the league title at Perry because we know we are very deserving of it,” she said. “We can be one of the best girls’ teams our school has ever had. We work hard every single day and we play for each other. Our team deserves that championship.”

“Today, it was important to move the ball on offense to find holes in Geneva’s defense,” Elle Infalvi said. “Most of my (four) 3-pointers today were contested, so I shot with a girl on me and a hand in my face. This was good, though, because it helps me work on a quick release and will get me ready for playoffs.”