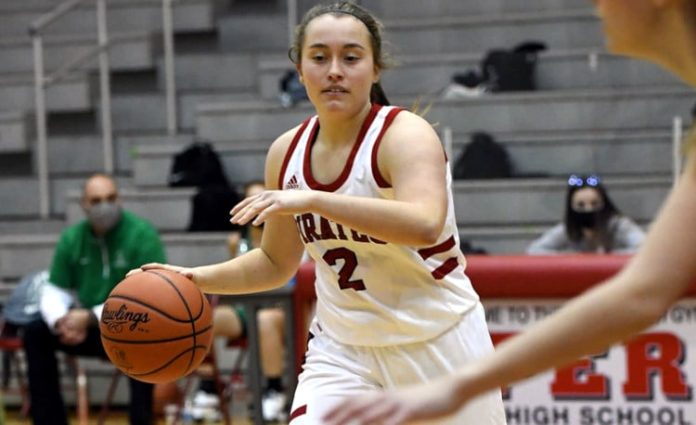 In a clash of the top two teams in the News-Herald Top of the Crop, Perry pulled away from Brush down the stretch in a 52-40 win on Wednesday.

The Pirates, who improved to 6-0, entered the game ranked No. 1 while the Arcs, who were hitting the court for the first time this winter, were No. 2 and the preseason favorite to win the rugged Western Reserve Conference.

“This was one we were really looking forward to,” said Perry coach Roy Infalvi, Jr. “I know Brush is just coming off of being shut down for a little bit so this was their first game back, but they’re a super talented team and they play really hard. We knew it was going to be a good measuring stick to see where we are and I thought we passed the test.”

It was the second test in five days for the Pirates, who knocked off No. 7 Gilmour on Saturday.

“Today, we got the job done,” said Perry senior Elle Infalvi, who led all scorers with 23 points. “It was so fun to battle out a win against a good Brush team. Tonight was a team win, whether my teammates were on the bench or in the game. I’m so happy to be on a team with such great teammates.”

Infalvi drained four 3-pointers in the first half as the two teams stayed within just a few points of each other.

Brush’s Kayla White nearly matched Infalvi’s 14 first-half points as she finished with 12 to keep the Arcs within 26-23 at halftime.

With Infalvi and Madyson Hacking controlling the offensive end and Perry’s stingy defense holding on the other, the Pirates dominated the second half.

Infalvi and Hacking, who scored 17, combined to score 40 of Perry’s 52 points and the Pirates limited White to just two points in the final 16 minutes of play.

“That was really big,” Coach Infalvi said of Perry’s keys to victory. “We knew we’d have to come in and make the big shots and get some scoring, especially from Elle and Madyson, and they both did a good job of scoring. Elle was shooting the ball well and Madyson made a lot of hustle plays for scores. That was key. We knew coming in that we were going to have to be able to handle their pressure and get some points off of that. I thought we did a good job of that too.”

“My shot has actually been funky the past week,” she said. “I was missing short and side-to-side, so tonight, I made sure to relax and trust my shot and judgments.”

The Pirates also had to overcome a size disadvantage.

Four of Brush’s starters stand over 6-feet tall, which forced Perry’s bigs—Marcela Rodriguez and JaC’ana Anderson—to rise up to face that challenge.

“I thought JC played a great game being physical inside, boxing out, getting rebounds and Marcela made some hustle plays to get some tips and deflections and she grabbed some big-time rebounds. She was really strong inside,” Coach Infalvi said. “We did have a height disadvantage, but I thought we matched their physicality and aggressiveness and we were able to get those loose rebounds and 50-50 balls and that makes a big difference in these big games.”

Izzy McKoon was the only other Pirate to score. She finished with two points off an athletic move in the backcourt that led to an easy layup during Perry’s second-half run.

“She had a couple of big plays,” Coach Infalvi said of McKoon. “She had that layup and she forced a jump ball off of a ball screen. She’s a spark plug. I know when I put her in the game she’s going to give effort. She’s only 5-foot-5 or 5-foot-6 but she’ll go in there and guard and bang around with 6-footers. She doesn’t back down. I love how she plays and her aggressiveness.”

Taylor Johnson-Matthews led Brush with 17 and White finished with 14.

“That was a big win,” Elle Infalvi said. “Throughout the game, I feel like we stayed calm and trusted one another. We know what we are capable of and tonight we proved that now we just have to keep working.”

The Pirates travel to Akron Hoban on Wednesday.