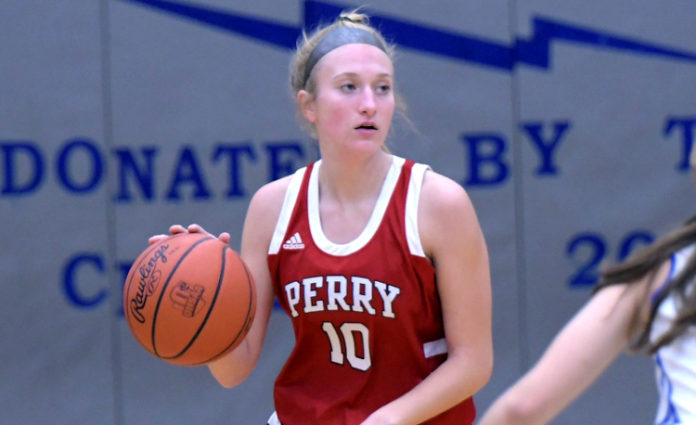 Nine different players scored and Perry’s defense was as stingy as ever in a 67-27 non-conference win at Bay on Monday.

“Bay has a great program, they’re well-coached and their girls play hard,” said Perry coach Roy Infalvi, Jr. “They have a couple of real good shooters and a good inside player, so it was good to come out and have a test today. I thought our girls did a great job and executed really well. We really played good defense, especially in our press.”

Perry hasn’t been tested during its nine-game winning streak as the Pirates have outscored those nine foes by an average of 43.8 points per game.

Despite that run of dominance, the Pirates remain grounded and focused on one game at a time.

“We talk about that a lot,” Infalvi said. “We always talk that it’s about us and not about who we’re playing. We have to approach every game the same way. I give all the credit to our team because they come out and do it. It’s a lot easier said than done but they continue game in and game out with that approach and if we can continue that, some special things can happen.”

On Monday, Hacking led the way with 20 points while Infalvi finished with 17.

“It felt great to come out tonight and get this win against a good bay team. We played with great intensity and it’s a big win to get before District voting,” Hacking said. “We came out tonight knowing that we needed to set the tone and that Bay wouldn’t just roll over. Staying focused on defense and having that suffocating defense really helps us get this big win.”

JaC’ana Anderson contributed to the win with 10 points, Margaux Jean added seven and Izzy McKoon pitched in with five.

“Over the course of the past four or five games, we’ve had some girls really step up a little more in the scoring,” Coach Infalvi said. “JaC’ana has had a really good stretch where she’s coming off 14, 14 and 10 tonight. Marcela has had a couple of double-digit games. Margaux hasn’t scored a ton but she’s racking up the assists and she doesn’t turn the ball over and her defense has been lights out. Izzy McKoon has been a spark plug for us all year and this is the second game we’ve had Gigi Vicini back. She played a little bit on Saturday and a little bit more today so we’re getting her back in the routine. She’s one of our best defenders so getting her back is going to make us stronger.”

Despite their run of success, the Pirates remain focused on their long-term goals.

“We are definitely heading in the right direction to being where we need to be for a deep postseason run,” Hacking said. “We’ve had some challenging games early in the season that set a tone for how we need to play. We have some great games coming up the rest of this month and in February that will help us finalize what we need to do for the postseason. Overall, I’m really happy with my team and how we are playing. We are sharing the ball and playing amazing defense and I can’t wait for a deep run in the playoffs.”