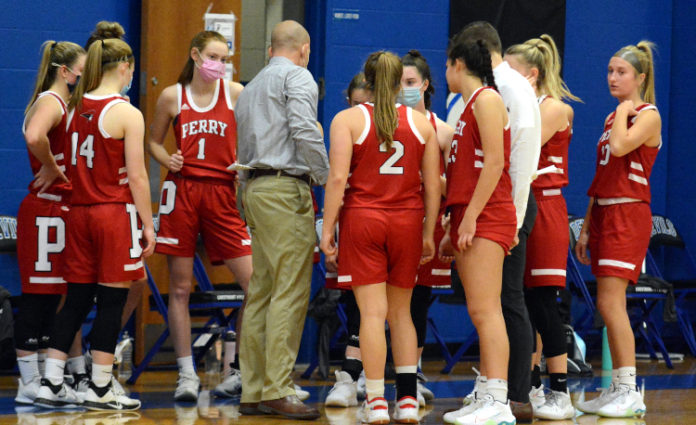 The Pirates took an 11-point lead into the fourth quarter at Archbishop Hoban on Wednesday but saw the Knights score 35 points in the final eight minutes to pull out a 77-69 win.

For Perry, the loss was the first of the season and also snapped the Pirates’ six-game win streak.

“I thought we played 27 or 28 really good minutes of basketball,” said Perry coach Roy Infalvi, Jr. “We had a four-minute stretch in that fourth quarter where we just kind of fell apart. We forced some things and had some turnovers. They picked up their aggressiveness and we didn’t respond and execute very well.”

Hoban cranked up the pressure in the fourth quarter and the Pirates were slow to react.

By the midpoint of the quarter, the Knights had taken the lead and began to slowly pull away from the Pirates.

“They ended up scoring a majority of their points off of turnovers and off of transition in that period,” Infalvi said. “We took a couple of timeouts but we just weren’t able to regroup quick enough.”

The Pirates extended that lead in the third quarter and held a 53-42 advantage heading into the fourth.

Hoban dominated the final eight minutes on both ends of the court.

“Even when we did go down and score, we didn’t do a great job of getting a stop on the other end to kind of stop the bleeding,” Infalvi said. “I’m disappointed in what happened but I’m not disappointed in our team at all. It’s just one of those things where we have to respond in those situations and I think we will.”

The Knights, who reached the Division I regional semifinals last season, got a game-high 28 points out of Lanae Riley.

Riley scored 11 of her 28 in the final eight minutes.

“I think she ended up with 28 in the game, but I thought we did a really good job against her defensively,” Infalvi said. “I thought we had good help. JaC’ana (Anderson) did a great job against her and Sophia (Makad) did a good job inside. We were physical. We did a lot of really good things, and we’re going to learn from our mistakes, but we’re also going to take away a lot of the good things we did and continue to build on that.”

Madyson Hacking led the Pirates with 20 points and Elle Infalvi chipped in with 18. Margaux Jean added nine and Maddy Lambdin, Makad and Anderson each finished with six points.

Despite their first loss of the season, the Pirates are optimistic they’ll be a better team following this setback.

“We went out and played a game on Dec. 23 against a Division I powerhouse and knowing that we let the win slip away, that hurts, but also our girls know we should have won that game and next time we have that situation we’ll take those lessons and run with them,” Coach Infalvi said.