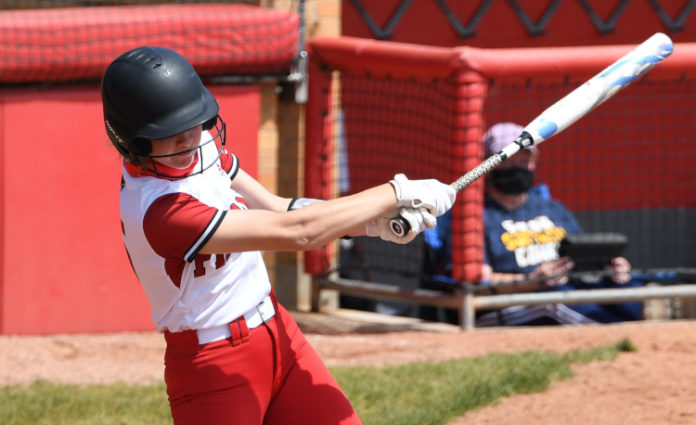 Calli Thompson and Gigi Vicini both recorded two hits and Faith Hartman struck out eight in leading Perry to an 11-0 win over visiting Grand Valley on Tuesday.

With the win, the Pirates improved to 13-7 overall and 8-0 in the Chagrin Valley Conference. Perry extended its conference winning streak to 63 straight games.

“It’s a lot of fun being a part of that win streak and going out onto the field knowing that the next game we win will extend that streak,” Vicini said. “I think it makes us play harder and to keep it going knowing that it will go down in Perry history, for sure, is amazing.”

Elle Infalvi hit a leadoff double in the bottom of the first inning to spark a two-run rally. Thompson singled her home and then Sydney Moon, who had reached on a fielder’s choice, scored on a bases-loaded walk.

The Pirates added four runs in the second.

Emma Webb drew a leadoff walk and Rileigh Liddy singled. Infalvi then walked to load the bases with no outs. Thompson hit a two-RBI single and Infalvi scored on a passed ball to push the Perry lead to 5-0. Thompson scored on a Lilly Agostine groundout.

Vicini singled in the third and scored on an Infalvi popup that gave the Pirates a 7-0 advantage.

Perry pushed across four more runs in the bottom of the fourth and shut down the Mustangs in the fifth to invoke the run rule.

Thompson reached on an error and scored on a passed ball to start that rally. Moon then walked and Agostine followed with a two-run homer. Emma Pietrzak and Vicini hit back-to-back singles and Mia Ward hit a two-out single to close out the scoring.

Vicini finished the game 2-for-3 with a run scored.

After a strikeout in her first at-bat, she made the necessary adjustments and finished the game with two solid plate appearances.

“My first at-bat was rough and I just shook it off but my next at-bat, I had to figure something out to get my bat on the ball, so I just got my bunt down and was able to get on base,” Vicini said. “It worked well and my at-bat after that, I was able to get a decent hit to the outfield. It was extremely hard to hit today because I’m not used to that slow of pitching. I (struck) out my first at-bat, completely missing the ball, but all I could really do was laugh it off and get a hit next at-bat.”

Thompson was 2-for-3 with two runs scored and she knocked in a team-high three runs.

Infalvi, Agostine, Pietrzak, Webb, Liddy, and Ward each finished the game with one hit.

Hartman allowed just one hit and struck out eight in four innings of work. Ward threw the final inning. She threw just seven pitches to the three batters she faced.

“I’m just proud of the bottom of the lineup with girls like Rileigh Liddy and I know Calli is in the two-hole, but wow, she all of sudden has found it, and what better time than going into the playoffs,” said Perry coach Joe Medlen. “Mia Ward is also coming off the bench and throwing strikes. Any little bit helps the big picture from a pitching standpoint. I believe our defense has also settled in.”

The Pirates travel to Edgewood on Wednesday looking to remain undefeated in the CVC Lake Division. Perry then hosts Division I South on Thursday.

“We will get challenged early, so it will be fun to see how we react,” Medlen said. “South will challenge us for sure on Thursday. We’ll try to limit the damage and give ourselves a chance to win. That’s our game plan moving forward.”