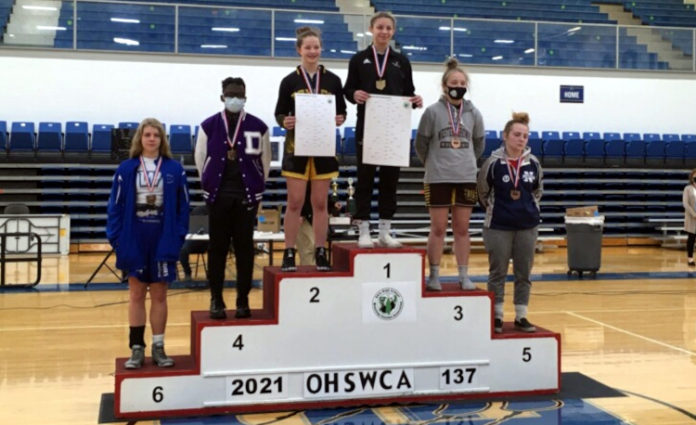 What started four years ago as a dream concluded on Sunday with Alyssa Pirro winning her second-straight Ohio High School Wrestling Coaches’ Association state championship and her third title overall.

The Lutheran West senior was part of a plan to build a girls-only wrestling team at the school and four years later, seven of her teammates watched as she pinned Taylor’s Meghan Werbrich in four minutes flat to win the 137-pound championship.

As a freshman, Pirro wrestled on the boys’ team at Lutheran West.

The Ohio Athletic Commission then announced it would hold a girls’ state tournament, which led Lutheran West coach Dave Ressler to put together a team for that March 2019 event and Pirro won the 142-pound championship.

The OHSWCA followed suit and held its first girls-only state championship last winter for any wrestlers interested in competing.

Over 200 girls signed up, but Pirro wasn’t challenged as she went 3-0 with three pins on her way to winning the 143-pound title.

The overwhelming growth of girls wrestling in Ohio forced the OHSWCA to add four district qualifiers around the state. Pirro won her division at the Northeast District and seven of her teammates also qualified for this year’s state tournament.

On Sunday, she was the only Longhorn remaining.

She opened the tournament with a 22-second pin of Marysville’s Lauren Sloboda and then flattened Mason’s Emma Schatzel in 20 seconds. Western Brown’s Lacie Reese provided Pirro with a challenge in the semifinals but Pirro eventually ended that match in 5 minutes, 22 seconds.

That semifinal win set up a championship bout with Werbrich, who is ranked third in Ohio.

Werbrich tried to catch Pirro in a headlock but Pirro fought it off for the final 20 seconds of the first period without giving up a takedown nor back points.

“At that point, I was really nervous because she almost had me,” Pirro said. “I know I’m good under pressure, so that helped me.”

Pirro started the second period in the bottom position and once again found herself fighting off a Werbrich headlock attempt.

This time, Pirro earned a reversal and put Werbrich on her back. Pirro held her grip for 48 seconds before Werbrich bridged out of the pinning combination and back onto her belly.

Pirro wasted no time taking advantage of the now fatigued Werbrich. She ran a Power half-nelson and quickly turned Werbrich to her back and stuck her as time expired in the second period.

With another championship under her belt, Pirro will compete in next weekend’s boys’ Division III sectional tournament at Independence.

After that, she’ll take a month or two off to allow her body to recover, and then she’ll compete on the freestyle circuit with an eye on the national tournament this summer.

Pirro committed to Indiana Tech last December so she’ll continue her education and wrestling career in college but she’ll always remember her days at Lutheran West and how she helped to build a girls-only team at the school.

“It means a lot to me,” she said. “When I was younger, we never had this opportunity and now there are so many girls coming out in wrestling. They don’t care if it’s their first year or what, they’re coming out hard. It’s really cool to see how many girls there are now.”

Results from other area state qualifiers: