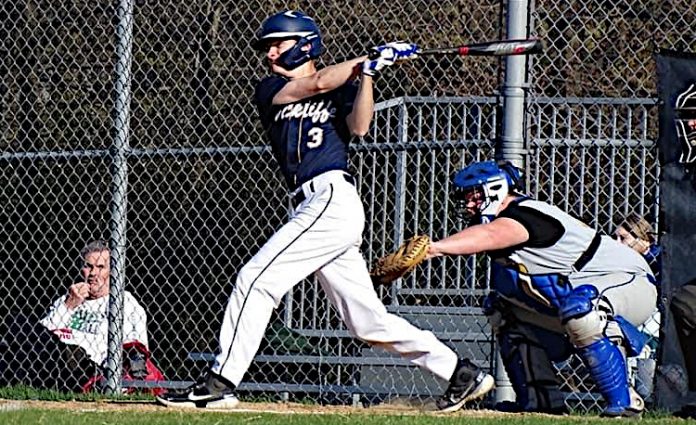 Wickliffe returns eight starters and its top four pitchers from a season ago leaving head coach Phil Motta confident the Blue Devils are ready to compete this spring.

The Blue Devils finished 11-15 overall and 3-9 in the Chagrin Valley Conference Metro Division a season ago.

“While we lack overall roster depth, we do have players that play multiple positions and our top four pitchers are returning this year,” Motta said. “We are still a young team with only four seniors, but we have a lot of guys back after playing their first season of high school baseball.”

With a more experienced lineup this season, the Blue Devils should convert many of those close losses to victories this spring.

“We competed in every game last year,” Motta said. “There were some games that got away from us and things tended to snowball. One of the strengths for our guys is that it didn’t sit well with them and they have a focused mindset to take the next step to become a team that can compete in the league once again. We have to do the little things in order for that to happen.”

Returning all four of its top pitchers also should help Wickliffe remain competitive this spring.

“We have our top four pitchers back from last season and we have guys that have to play multiple positions,” Motta said. “We hear about teams that have 20 guys, first relievers, middle relievers, closers, bullpens, (pitchers only), etc. That’s great for them, but that is not our reality. Our reality is, however, having our top four pitchers back from a year ago. We may not have the depth that other teams have, but our guys are always playing and they are flexible. This is a competitive team.”

Seniors Calvin Cackowski and Greg Kita and junior Colin Casey are among Wickliffe’s most talented and experienced players.

Cackowski, a Thiel baseball commitment, returns after suffering an injury early in the 2021 season. The 6-foot-2, 185-pounder will start at catcher but also will pitch and can play shortstop. He batted .406 last season in 32 at-bats with five doubles. He also struck out 46 in 38 innings of work.

“Calvin Cackowski was on fire last season before fracturing his hip during a game,” Motta said. “We are looking forward to seeing what he does this season in his fourth year on the varsity. Calvin would be the starting catcher on most teams. For us, he will catch, pitch, and play shortstop. We believe he is not only one of the best catchers in the area, but is also one of the best pitchers as well.”

Junior Jimmy Nemeth will catch when Cackowski is pitching or at short.

He’ll start at third and also pitch and fill in at first when senior Josh Dohm is pitching.

“Greg Kita can play just about every position as his versatility is vital,” Motta said. “Josh Dohm gives us power from the left side of the plate. If pitchers try to throw him out, he will just take it the other way.”

“Colin Casey is a fun player to coach because he is full of positive energy and keeps the team’s spirits up,” Motta said. “He pitches, plays middle infield, and is our leadoff hitter from the left side of the plate.”

Derganc earned all-conference honorable mention last season after batting .347 with 16 RBI and 18 runs scored. He also threw 40 2/3 innings with a 2.75 ERA and 51 strikeouts.

“For us, it is about the nine or the 10 guys coming together to reach goals,” Motta said. “It is about a game-to-game mindset. I think teams that play us will see that we have guys that stand out and that play hard. We are excited to have most of them back from the 2021 season.”

Wickliffe’s experience and depth could go a long way in the Blue Devils finding success this season.

To do that, the Blue Devils, like every other team, must remain healthy and overcome the adversity they’re sure to face every time they suit up.

“We have to stay healthy,” Motta said of his team’s keys to success. “Collectively, we need to learn to have short memories and don’t let setbacks get to us. That happens with young teams. Hopefully, and with that experience from last year, we can be the mentally tough team we know we can be. Baseball is a game in which a player has to be mentally tough to be successful. We also need guys to accept their roles on any given day.”