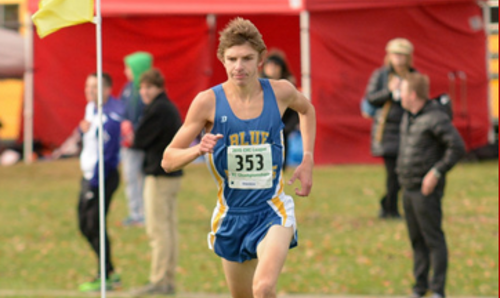 After an injury slowed down Tyler Polman during the 2014 season, the Independence junior finished sixth in the OHSAA Division III state cross country meet on Saturday to earn All-Ohio honors for the second time in three seasons.

Polman also finished sixth in the state meet as a freshman in 2013.

“It feels great to earn All-Ohio status for the second time since my freshman year,” Polman said. “This was much better than last year as I sat in the stands with a stress fracture watching the state meet and thinking that I should be out there with the top guys.”

Maplewood senior Tristan Dahmen won the race with a time of 15:18.8. It was his second straight title after finishing second in 2013 and 33rd in 2012.

Antwerp’s Sam Williamson finished second with a time of 15:36.7.

Polman finished the first mile in 4:46.1, less than one second slower than the top three finishers. He hit the two-mile mark in 10:05.06, 15 seconds behind Dahmen.

“I got out a little too hard and paid the price for it late in the race,” Polman said. “I paid for it the last mile when two athletes kicked me down in the last 600 meters. Overall, making the podium and earning All-Ohio status made for a good performance and it motivates me to come back stronger next year.”

Independence’s Dana Zaccardelli placed 59th in the girls race with a time of 20:15.1.