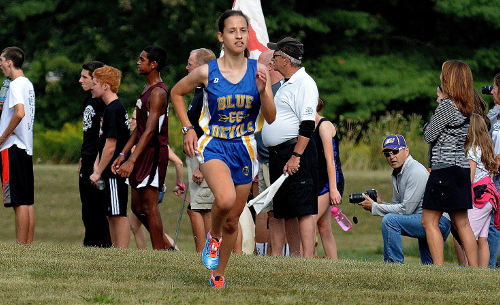 Independence sent just three runners to the 2015 Dan Olien Invitational at New London High School on Saturday but two of them came home with individual titles.

“I thought we had a good chance to win both races,” said Independence coach Craig Polman. “I certainly didn’t think we’d be as dominating as we were. It was kind of fun to go out there; two races and two champions.”

Polman’s win was the 16th of his career while Zaccardelli notched her second race win.

“I think the main thing was it was a good confidence builder to go and have a good result as we get into our conference meet and the full tournament round,” Coach Polman said. “For Dana, that was really her second career win. It’s kind of surprising because she really is a good runner. Last year she was hurt all season except for the district and regional meet and she just missed qualifying for state. Her freshman year she won one meet but she was second fiddle to Jen Wisniewski most of the time.”

Freshman Emma Wensink finished 50th with a time of 24:12.

“She has run five races this year and has basically gotten faster every race,” Coach Polman said. “She had another season best on Saturday. She is certainly coming along, getting better each week and adjusting to the distance.”

The Blue Devils will compete in the Chagrin Valley Conference meet on Saturday at Hawken.