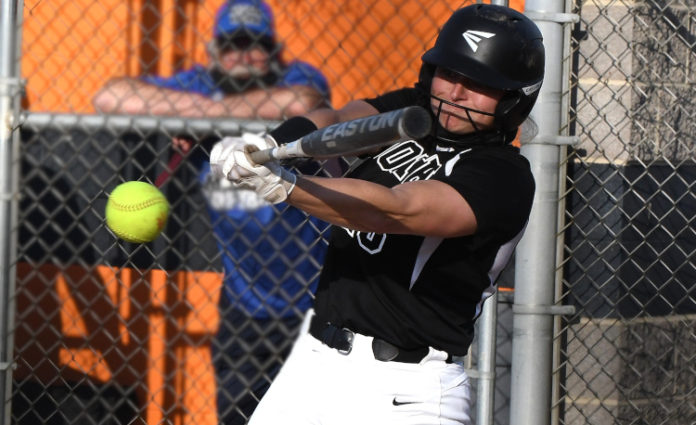 Jess Dodd and Hailie Wilson both hit home runs and North pounded out 14 hits in a 12-2 five-inning win over visiting Mayfield on Friday.

With two four-baggers on Friday, the Rangers have now hit at least one home run in four straight games.

“Our offense has stepped up big time in these last few games,” said North coach Taylor Braddock. “The girls are taking aggressive approaches at the plate and making good adjustments in the box.”

North’s hit parade started early as Adri George led off the bottom of the first with a single and after Emily Zaleski drew a walk, Jess Dodd hit a home run for the third straight game.

Not to be outdone, Hailie Wilson followed Dodd’s home run with one of her own to make it 4-0.

Madelyn Cicero reached on an error in the second and scored on a George single and the Rangers added four more runs in the third.

Mayfield scored two runs on three hits and an error in the top of the fourth to break up Amanda Dobida’s shutout.

The freshman went the distance to pick up her fourth win of the week. She allowed two unearned runs on five hits and struck out six.

“Amanda has had a few strong games this last week,” Braddock said. “She’s been a bulldog on the mound. She doesn’t pitch like a freshman; she has a great mentality in the circle and that helps her. She hits her spots and trusts the pitch calling. She’s a special kid.”

George drew a leadoff walk in the fifth and Zaleski singled to put runners at the corners with no outs for Dodd.

The North senior made the most of her walk-off opportunity.

“We were three runs away from ending the game,” Dodd said of her final at-bat. “Adri and Emily getting on just put me in the zone to finish it off. I went up there with a mindset of just bat speed and hitting it hard. She missed her spot and pitched me down the middle and I knew she made the mistake and couldn’t let that one go.”

“I’ve just been relaxing at the plate,” she said. “When I get up there and not think, that’s when the ball goes for me. The key to success is not thinking when up at the plate.”

Dodd finished the game 4-for-4 with two runs scored and four runs batted in. George was 3-for-3 while Zaleski and Wilson both finished 2-for-3.

“This past week, our seniors have stepped up so well,” Braddock said. “They’ve hit how we expect them to and beyond. They’ve got to keep that rolling.”

With the win, North improved to 8-1 on the year.